Since its inception, Valorant has been a great hit in the esports community. Hero shooters are incorporated, but the fundamental gameplay is firmly rooted in Counter-Strike: Global Offensive (CSGO). The gunplay, in particular, can feel strikingly comparable to that of CS GO in this game. It’s a fair comparison between the two, but which one is more popular?

There is some evidence that the CSGO vs Valorant player count can help determine which game is the more popular. The number of people playing Riot is already impressive.

As a team-based competitive shooter like Rainbow Six Siege, Overwatch, and most crucially Counter-Strike, Valorant is described by Riot Games. Five-on-five matches are played between two teams, with the goal of winning 13 out of a possible 25 rounds.

One squad is given the duty of installing an explosive, known as the Spike, while the other tries to prevent it. Attacking teams win a point if their Spike is successfully planted, while defenses are penalized for stopping it from being planted. As a last note, if either team eliminates all of the other players, they win the round and the match ends. 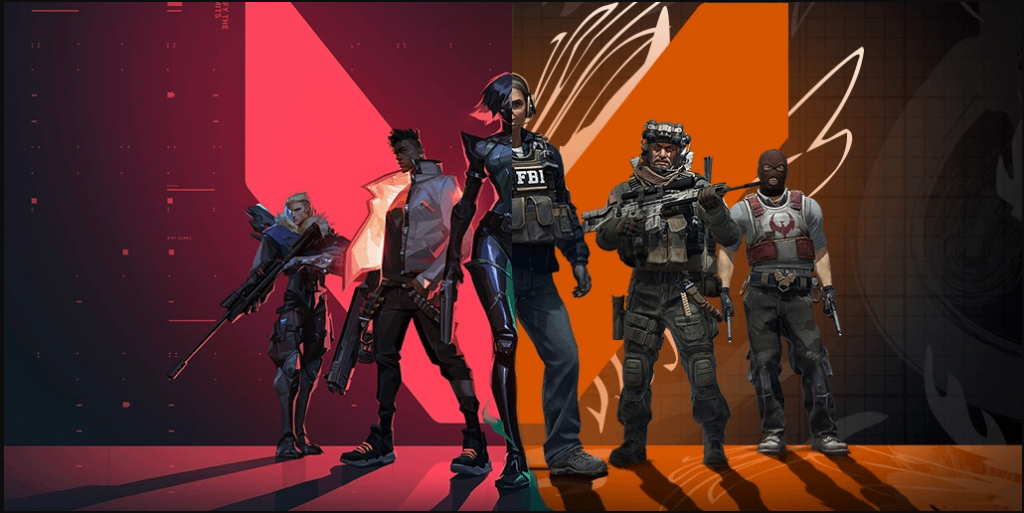 Even a 25-round battle in Valorant only lasts approximately an hour and a half, compared to similar games. Agents, which Valorant refers to as players’ chosen characters, each have a single life and can be utilized to alter the map and harm other players.

How Does It Compare To CS: GO?

Since most of the parallels between Valorant and Counter-Strike are visible at the surface level, it’s impossible to ignore them. Both games include a 5v5 team style with the primary goal of defusing bombs. During the buy phase, players can acquire weaponry and abilities (in the case of Valorant) before the start of a game. Maps contain three alternative positions for the bomb (or Spike).

Both games have TTK (time to kill) criteria that are exceptionally low. The vast majority of weaponry in Valorant can only be used once before a player is lucky enough to die. For each gun in Valorant, the spray pattern may be mastered through practice, just as CS:GO.

It’s reasonable to assume that the Valorant community will build its own weapon meta in the same way as CS: GO players did, especially given how important mobility is in both games. Each weapon in Valorant has a varied weight, just like in Counter-Strike, which has an effect on movement speed and accuracy.

Valorant’s character selection differentiates it apart from CS: GO in one minor way. Each of the ten characters in Valorant has a unique set of abilities, including a timed ultimate that builds up over the course of the game. During the course of a match, players can purchase extra skills for their agents.

Although Valorant’s abilities are more visually appealing and enjoyable to use, they effectively serve the same purpose as utility items like flashbangs, smoke grenades, and Molotov cocktails in Counter-Strike: Global Offensive. Although Sage’s healing orb and Omen’s ultimate, which allows the player to travel to a specific place, are notable exceptions.

As powerful as most ultimate powers are, they might take a long time to charge up, making them a secondary concern in the moment-to-moment conflict. Each Agent in Valorant has the same health and virtually equal hitboxes to maintain the game’s balance. 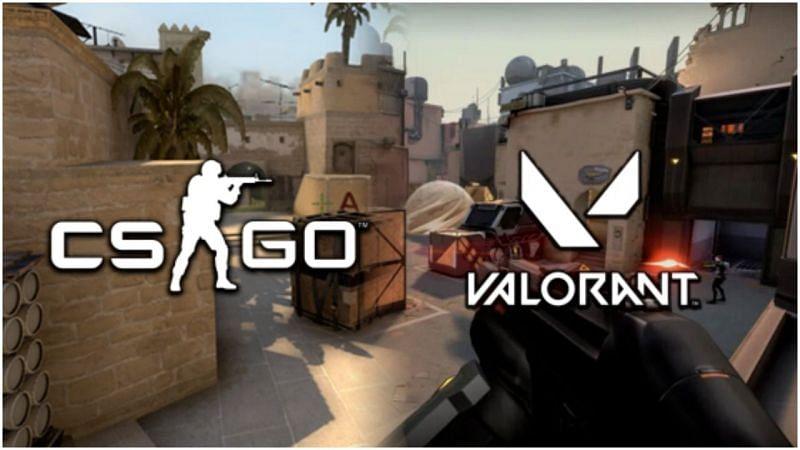 Valorant has six weapon types: sidearms, SMGs, assault rifles, sniper rifles, shotguns, and heavier weapons like RPGs. When it comes to performance, most of the weaponry available for purchase have a remarkable resemblance to CS: GO’s. A headshot kill is possible with almost any pistol, even SMGs because of their superior ability to spray rounds.

Some weapons might be said to be almost identical clones of Counter-Strike weaponry that have merely been reskinned. In terms of weapons, the Frenzy is a CZ-75, the Sheriff is a Desert Eagle-like weapon, and the Operator is a stripped-down AWP.

Shields are Valorant’s version of Counter-Kevlar. Strike’s There are two shield types in Valorant: Light and Heavy, which can be used instead of Kevlar and a helmet. In the end, the slight differences between the two games can’t disguise their striking resemblance.

CS VS VALORANT PLAYER COUNT – WHICH HAS MORE PLAYERS?

At this point, we may examine the metrics provided for the CSGO versus Valorant player count. As of right now, Valorant has a player base of 14 million people. Insofar as Riot Games’ current player count is concerned. During the early days of the game, it reached a peak of 3 million participants online at the same time. Over time, the number of active players has decreased, although this is typical for any game. Although Valorant is updated on a regular basis, its value will fluctuate greatly at times. As long as the game keeps adding new content, it’s impossible to conclude that it’s at its top. The fact that there are still 14 million monthly users is also rather noteworthy.

CSGO has 26.9 million monthly active users. This is more than twice as many players as Valorant had at its peak. In spite of the fact that it is difficult to determine how much time those players are spending in the game. In other words, this isn’t really a reflection of whether Valorant or CS GO is better.

According to Steamcharts, CSGO saw an average daily player count of 700,000 over the past year, with a high of 1.3 million.

Only last year’s active service is taken into account when comparing the two titles. There is still a long way to go for Valorant to catch up to the competition. This suggests that there is still a lot of room for development in the player population. It took a long time for both Fortnite and Warzone to reach their peak player counts. So, this isn’t the last word on the CS vs Valorant player count, but rather an indication of how the two games are currently doing.

Both Valorant and CSGO have a sizable competitive following. There are other ways to compare the two, such as looking at the CSGO vs. Valorant player count. We can see how popular these games are for both playing and watching by looking at the number of people who watch esports events.

There is still a strong following and active community behind CSGO for FPS aficionados. Shroud’s broadcast and co-streaming partners enabled recent Valorous VCT events reach a peak of 740,000 viewers. When compared to a CSGO event, the most popular event in the previous year had a peak of 596,000 people watching it.

As a result, the two games’ player populations are roughly in line with each other. Valorant, on the other hand, continues to grow rapidly in this area as well. Valorant betting has become a popular pastime, and the number of people tuning in to watch is steadily rising. If you compare Valorant to the CSGO scene, you’ll see that the viewership is more evenly distributed. This is because the CSGO scene is more stable and there is more everyday activity.

In the end, Valorant and CSGO are well-liked games, and it will be interesting to see how they develop. If Valorant beats CSGO, we’ll have to wait and see what happens.

Shroud was questioned by a viewer if he believed Valorant was more challenging than CSGO during his watch-along stream of the VCT Masters Berlin final.

In answer, he noted that comparing the difficulty of the two games was impossible because they were both difficult in their own ways. Both titles are extremely difficult to grasp on a tactical level and need many hours of study.

One of the biggest changes between Valorant and CSGO, according to Shroud, was the way map control was implemented. Map control is never guaranteed in Riot’s FPS, and gaining it is a very different experience because to the significant role abilities play.

They “are both demanding games, it is impossible to claim one is harder than the other,” he remarked. “I think they’re equal in their own way,” he continued. CS-like map control technique can be found in Valorant, however how you take control of the map is radically different. 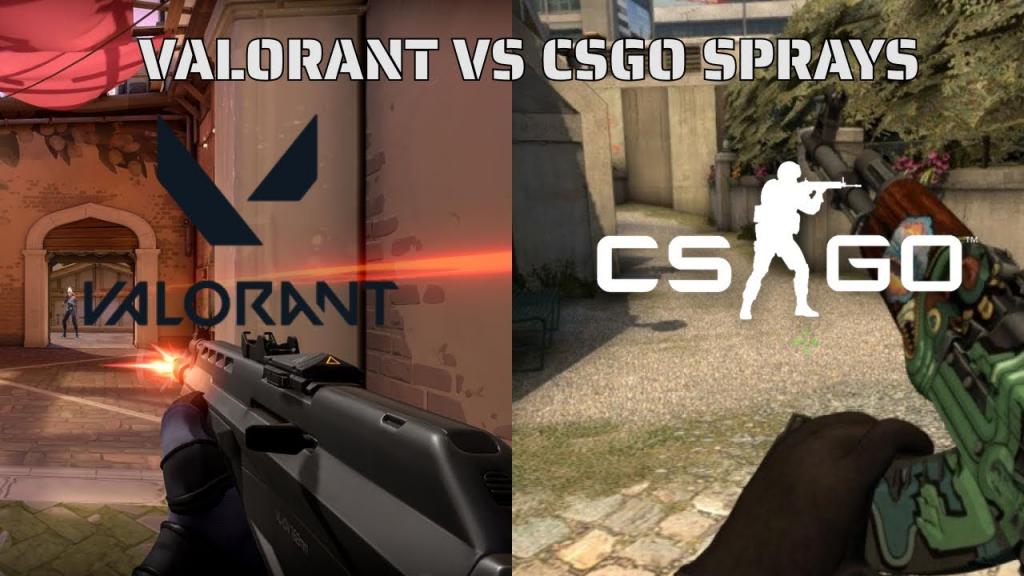 Even while shroud’s opinion hasn’t swung the discussion in favor of Valorant, it has illustrated why comparing the two games is so tough.

Even though Valorant is a role-playing game, it has a very distinct play style from the other games in the genre.

Valorant and CSGO are two of the most popular first-person shooter (FPS) games on the market today, and both demand a significant amount of time to master.

Is Valorant easier than CSGO?

As a result, his assessment is based on his time playing the Valve shooter. Just like CSGO, utility and team coordination are just as difficult to master at the highest level of pro competition. Due to the player’s skill level, CSGO was originally referred as as easier than Valorant.

Is Valorant more popular than CSGO?

Approximately 14 million people play Valorant each month…. The number of CSGO players who log on every month stands at 26.9 million. This exceeds Valorant’s player count by more than two-to-one. In spite of the fact that it is difficult to determine how much time those players are spending in the game.

Is Valo harder than CSGO?

Since foes can be readily gunned down and the more complex skills can be quickly discovered and mastered, Valorant is the easier of the two games. It is also less punitive. It’s a team-based game, so even a group of five people can have a fantastic time playing it.

Why is Valorant famous?

The game’s mechanics, in-game economy, and balance between individual play and teamwork are frequently lauded in the press. It’s no accident that Riot Games’ Valorant has received compared to CSGO so many times before…. Even Valorant’s developers were beaten by the Apex Legends crew.

Riot Games’ latest endeavor has been compared to Valve’s long-running tactical shooter for a reason. CS: GO’s influence can be seen in everything from character movement to gameplay to weapon performance in Valorant. Even if it’s bad news for Valorant in the long run, if Riot can differentiate themselves while keeping the greatest features of CS: GO, it might be a wonderful success.

Despite the inevitable comparisons to other hero shooters like Overwatch, expanding the roster to include additional characters with distinctive powers and playstyles is a positive step forward. It’s still possible for all of these games to exist side by side. Watching Valorant closely and seeing how the eSports community reacts will be important for us.