AKiTiO Node Review. Everything You Need To Know

The best approach to turn a laptop into a gaming machine is to add an external GPU. These are nothing more than small enclosures that connect to a laptop or desktop computer through a high-speed Thunderbolt connector and only contain a GPU and power supply.

The Akitio (stylized as “AKiTiO”) “Node” is one of the most notable external GPU cases on the market. Even while the Node isn’t the most compact GPU case, there are a number of good reasons for its popularity, all of which we’ll discuss in this post.

The Akitio Node is roughly the same size and weight as a typical Mini ITX computer case, as shown in this image. Its size and capable power supply make it compatible with literally any modern GPU, and hopefully, with the upcoming Turing/Ampere GPUs as well.

The Node connects to a PC or laptop through a Thunderbolt 3 connector, which is a bit more uncommon than the normal PCIe x16 slot for the graphics card itself. 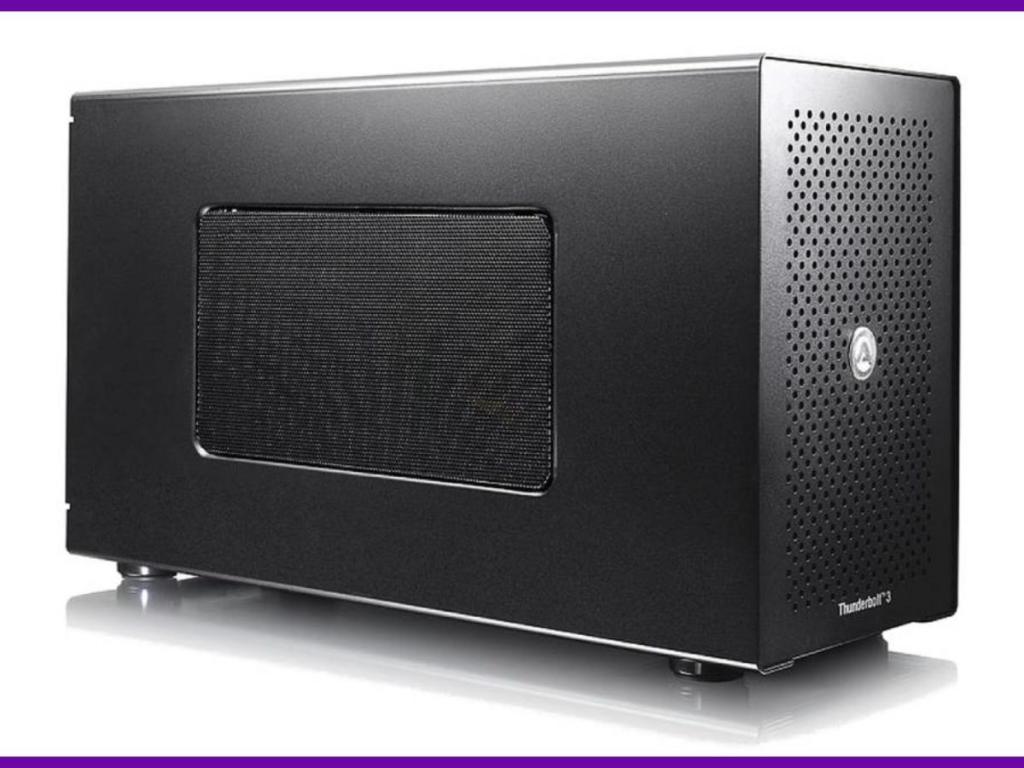 How To Install The AKiTiO Node

You don’t need to know much about programming to use the Akitio Node.

Now your portable GPU is up and running!

A single universal interface that can carry data, video, audio, and power was developed by Intel and Apple, and Thunderbolt is a step in the right direction.

It now uses a USB-C port, a connector that is becoming more common in laptops and motherboards of all price points.

As a result, an external GPU will always perform lower than an internal one because Thunderbolt 3 cannot transfer data at the same rate as PCIe x16. However, you won’t notice a performance decrease of more than 10% to 20%, depending on the CPU.

While the Node is big enough to fit any GPU, it has a powerful internal power supply capable of powering an average PC, much less a single GPU.

As an added bonus, both Nvidia and AMD cards have been tested and proved to work perfectly in the Node.

Make sure your PC or laptop supports Thunderbolt 3 before you buy a new computer or tablet, as this technology isn’t yet widely available. Even if your PC has a USB-C port, that does not automatically imply that it is compatible with Thunderbolt.

To see if your computer is Thunderbolt-enabled, take these steps:

Even so, we recommend you to check your laptop’s capabilities to ensure that Thunderbolt is working properly. Even though Thunderbolt is compatible, you may have a poor experience if the vendor scrimps on Thunderbolt integration.

With most shops, the Akitio Node costs around $300. In response to your question, “Why is half a computer case so expensive?” we’d like to say, “Yes, we know.”

Thunderbolt appears to be the culprit.

To make things even more expensive, Intel forces any company that employs the technology to pay a large licensing fee. That’s why we’re looking at a three-digit price tag today. And don’t even get me started on the GPU, which these days commands exorbitant costs.

The AKiTiO Node Titan’s packaging is rather straightforward. Everything you need to know is included in the box. Although the package is appealing and convenient to handle, the inside is exactly the same as the outside, thanks to the wise choice to use soft foam to cushion the unit during delivery.

The Node Titan’s instruction manual and two Thunderbolt 3 cables are packed away in a tiny package with the rest of the equipment.

When you take the unit out of the box, you’re greeted by the device itself. The AKiTiO Node Titan’s robust metal construction, retractable handle, and nearly monolithic shape make it extremely imposing for only an eGPU container.

This enclosure has a great mesh ventilation panel on the GPU front-facing side, which allows all kinds of GPUs to draw in some fresh air. Axial fans with two or three blades benefit the most from this design.

Once you’ve released the two spring-secured rear thumbscrews and shifted the top back a little, you’re ready to enter the Node Titan. The screws that hold the GPU in place have been enlarged so that they may be easily removed and reinstalled.

The 650w SFX PSU by FSP, however, is hidden at the bottom and is ready to power any graphics card you can fit in this bad boy while also powering your laptop (up to 85w)! So little was it that the ZOTAC GAMING GeForce RTX 3090 could fit inside? But for a more practical test, we used a SAPPHIRE PULSE Radeon RX 5600 XT to run everything.

I tested the AKiTiO Node Titan eGPU with the LG Gram 17 (2020 Edition) with an Intel Core i7-1065G7, which is the only Thunderbolt 3 device I usually use (16GB DDR4 3200, 1TB NVMe, Intel Gen11 Graphics). AKiTiO Node Titan and SAPPHIRE PULSE Radeon RX 5600 XT are a good match because the latter is an affordable graphics card that can be used with an eGPU for a performance boost, and the Node Titan’s bottom exhaust fan ensures that no excessive heat is generated inside the eGPU.

After plugging in the power supply, connecting the Thunderbolt 3 connector, and installing the Radeon Settings, we were ready to go in no time. First, I tried to power LG Gram’s internal display with Node Titan, which failed miserably due to the cable’s bandwidth limit, but using an external monitor with the Core i7-15w 1065G7’s power constraint resulted in an enjoyable game-playing experience.

GPGPU acceleration and workloads that benefit from compute increases are where this card really shines, not gaming. Video production is a good illustration of this. To put it simply, I was a major critic of LG’s Gram 17 because of its 15W limit and lack of a dedicated GPU, but when I added the Node Titan + 5600XT solution to it, video editing on Davinci Resolve 16.2 was a breeze and the machine became practical for serious work. So when I’m on the road, I can use the AKiTiO Node Titan with its crazy battery life, but when I sit down to work, the AKiTiO Node Titan is tearing through my workflow in an instant. There are three layers and each clip has color correction and more added to render in 1080p29.97 MP4 100MB/s, as shown in the video below.

A 60 percent time savings alone justifies the effort of upgrading your laptop. It’s easy to dismiss the benefits of OpenCL acceleration when you don’t see the results right away. The GPU encoding of the chronology and modifications boosted the overall workflow as well. It was noticeable how much faster Excel and GIMP were.

Setting it up and deploying it couldn’t be easier, and the advantages in workflow performance were substantial. Is there anything not to like? That being said, it’s not for everyone; it’s pricey and cumbersome to deal with, but it has a long life span and can be improved over time, so the price impact comes down to how much you’re willing to commit.

My main gripe with the AKiTiO Node Titan, as a whole, is that it lacks expansion options. There are no additional USB ports or ethernet cables included with the graphics card’s outputs. As a single-cable docking solution for laptops, it is unable to perform as well as it could. A one-trick pony that does one thing exceptionally well!

For those looking for an affordable and accessible external GPU, the AKiTiO Titan eGPU is a good choice on the market. While the Node Titan is built like a tank, it’s easy to use, which makes it a good option for most people who need to add some serious graphics horsepower to their portable Thunderbolt 3 capable laptops, but not for those who were hoping to attach a monitor, mouse, keyboard, speakers, and ethernet with one cable. People who are looking for a larger GPU may want to keep looking, while those who only need a little one for their specific purposes may have just found their own Titan.

Should You Buy It?

It’s enough to say that external GPU enclosures are a small market segment. For individuals without gaming desktops or laptops, but who still want to be able to play games on the hardware they do have, these apps are perfect for you.

Akitio Node (and most other current eGPU enclosures) aren’t worth the money, unfortunately.

The graphics card alone costs nearly as much as a PC, and you won’t even get close to the full potential of the card because of the enclosure.

Only if you already have a powerful laptop that lacks a competent graphics card should you get the Node. Although there are several laptops with i5 and even i7 processors, they all use integrated graphics.

For those who have a low-cost laptop with an Intel Core i3 or AMD APU, an entry-level gaming PC may be built for less than the cost of the Node itself, and it will likely outperform the Node (excluding the GPU and monitor).

Finally, it’s critical to keep an eye out for potential bottlenecks. It’s possible that the eGPU you connect to your CPU won’t be able to keep up if your CPU is too old or weak. You don’t want to buy a $300 enclosure and put a $150 GPU in it. 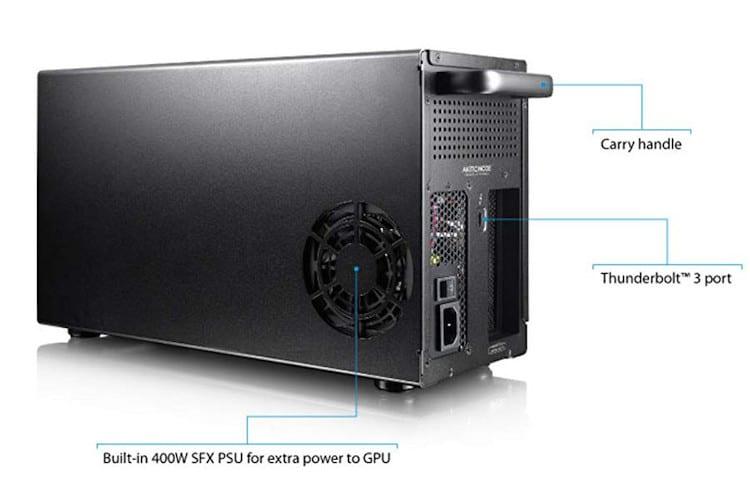 Akitio Node is best suited for laptop users who aren’t interested in constructing a desktop computer but yet need the portability that the Akitio Node provides.

It’s still advisable to go with the Gigabyte AORUS Gaming Box, because it’s small and has a built-in graphics card, which means you can save the high cost of purchasing an additional graphics card.

What do you think about the Akitio Node? Not a chance in hell. Because of its sturdy construction and compact size, it’s ideal for travel and can work with any graphics card. The price, on the other hand, will undoubtedly be the deciding factor.

In terms of the other eGPU cases, the Node takes the cake. More expensive than Node because they don’t include a graphics card. That being said, there aren’t many other options if you’re not interested in Gigabyte’s offer.