Even a few years ago, convertible computers and tablets seemed like something out of a science fiction movie. However, in 2022, these devices will be commonplace in many homes, and they will be more affordable than ever.

As a matter of fact, tablets and 2-in-1 laptops are some of the most convenient and portable computers that are now available on the market. They are incredibly light compared to traditional laptops, have excellent performance, and aren’t too expensive.

We’ll go into the pros and drawbacks of tablets and convertible laptops in this post if that’s what you’re searching for, so keep reading if you’re on the fence and can’t determine which is better for your needs.

To begin, what are the main differences between these two types of devices?

It’s easiest to think about tablets as just a bigger version of your phone. Only a few buttons and a single connector (Lightning, USB-C, or Micro USB) are present on these devices, which have a large screen and rely almost entirely on touchscreen interaction. Lightweight and long-lasting battery life are two more advantages of these devices.

As the name suggests, 2-in-1 laptops are two gadgets in one: they may be used as a laptop and a tablet. In certain cases, the display may be detached and used as a tablet, while in others the keyboard can be tucked behind the monitor. Aside from that, they come in a wider variety of prices and with a far greater range of specifications.

Tablets, on the other hand, are limited in their options. In contrast, some of the more expensive models have ports that you’d never expect to find in a tablet (e.g. Thunderbolt, USB Type-A ports, or HDMI), as well as powerful processors and GPUs.

Comparing the hardware capabilities of tablets with 2-in-1 laptops is tricky, thus broad generalizations can’t be made. However, the latter tend to offer higher computing power, but the former often perform better in terms of battery life

Mobile operating systems such as iOS, Android, or Chrome OS are commonly used in tablet computers Most 2-in-1 notebook computers, on the contrary, run Windows. As a result, what you can do with either sort of gadget and how well it’s tailored for specific tasks would naturally differ as a result.

There are a few things to keep in mind if you’re looking for a tablet for everyday use, such as browsing the web, playing games, listening to music, or viewing films and movies:

When it comes to productivity and multitasking, two-in-one devices may be a superior option. However, if you want to play PC games made for Windows, then a two-in-one tablet may not be the best option.

Even while a 2-in-1 laptop may be able to run applications like Adobe Premier or the most recent AAA games, the more capable 2-in-1 laptops cost a lot more than their more cheap equivalents or tablets.

Tablets being cheaper than laptops is a popular fallacy, but on the surface, it makes sense. Tablets, after all, are smaller and offer less features. For the most part, this isn’t the case, which means that you can’t just make your decision based on price and budget when comparing tablets and 2-in-1 laptops. Tablets can cost as much as or more than many hybrid laptops, while certain hybrids can be found for less than the price of some mid-range tablets.

You can discover an excellent hybrid laptop or tablet in your price range no matter what your budget is, which is a nice perk of this.

In the discussion between tablets and 2-in-1 laptops, design and features are the areas where your choice matters most. Tablets and convertible laptops both include a tablet mode, but the experience isn’t going to be the same because they both have a standard laptop form factor.

The vast range of connectors, the ability to switch between laptop and tablet modes, and the larger screen options of 2-in-1 laptops make them more adaptable and expandable. So, if you want a larger display or the ability to attach any essential peripherals, such as a mechanical keyboard and mouse or an external SSD and a dedicated webcam, they may be a better fit for you.

Most hybrid laptops are thicker and heavier when used as tablets than when they are laptops, except for those with detachable keyboards. These larger screens are extremely important, since they’re 15″ and 17″ wide. If you want to curl up on the couch and play a game or browse the internet at the end of the day, you’ll have a more difficult time doing so. 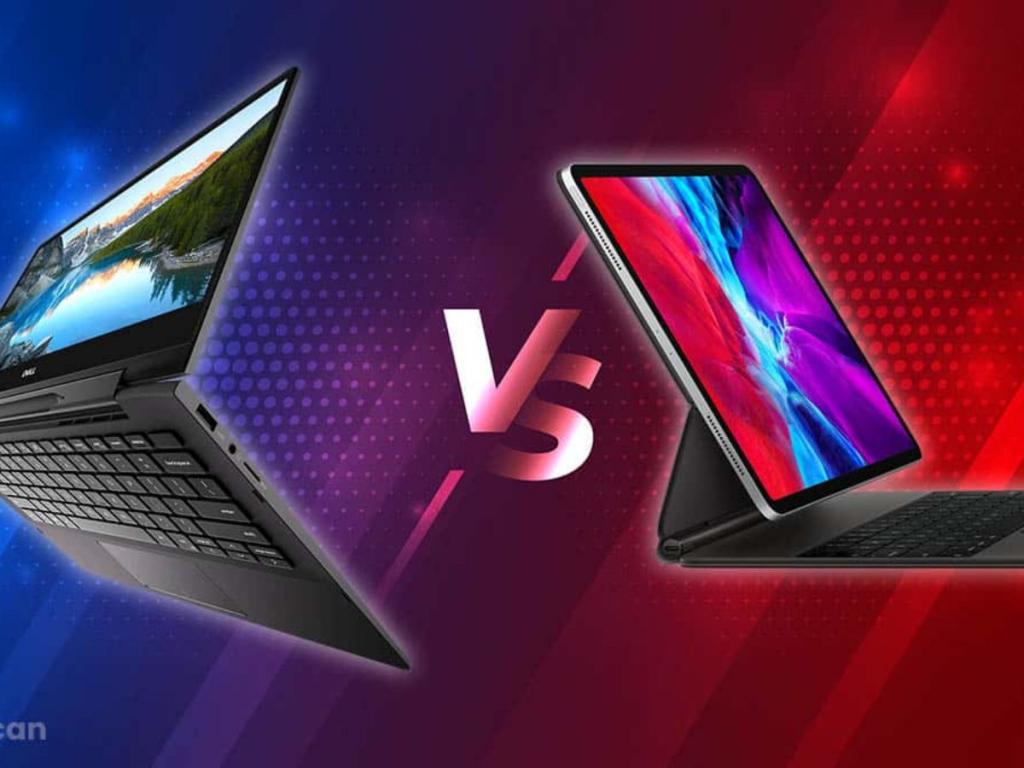 Tablets have the advantage of being tiny and light enough to be used both in bed and at a desk. Because of their portability, they make great travel companions. There are a few different ways to attach accessories than the usual one or two ports that are available. Of course there’s Bluetooth, but the Smart Connector and MagSafe are also in the works (for iPads).

You should be mindful of this fact while purchasing a tablet, even if it is a high-end model. Using a mouse or trackpad on an iPad or Samsung Galaxy Tab isn’t as fluid as on a standard Windows laptop, for example. If you can live with these constraints, then a tablet’s smaller size may be more beneficial to you.

Tablets can’t match the power of 2-in-1 laptops for the time being, at least not yet. Tablets, on the other hand, can do a lot on their own. The M1 processor in the new iPad Pros, for example, is powerful enough to get you through your video editing demands while you’re on the road. The Samsung Galaxy Tab S7 Plus, which has Android’s fastest chipset, is a blast to use for gaming.

To counter this, the CPU and GPU in hybrid laptops, particularly those running a complete operating system like Windows 10, are typically more powerful, allowing them to run full-featured software and apps, which are hugely beneficial to productivity. The Lightroom Mobile app, the Google Docs mobile app, and even browsing the internet on your tablet may all be possible. Your experience, on the other hand, will be a little less flawless and a little more limited.

Because not everyone requires full-featured software to suit their daily computer demands, there is a silver lining The more powerful internals and operating system of a 2-in-1 laptop are necessary if you’re a creative or business professional. A tablet, on the other hand, may be a better choice if all you need it for is email, entertainment, and social networking.

If you can’t decide between the two, you can rest easy knowing that the battery life of each is the same. If you want to commute or travel light, you can leave the charger at home because today’s greatest tablets and 2-in-1 laptops have an average battery life of 10 to 12 hours.

In comparison to tablets and 2-in-1s, laptops offer significantly more storage space and speed. To keep up with several tasks, a laptop has more RAM, which allows it to run a more complex operating system, whereas a tablet is limited by its “scaled-down” version of the operating system. Aside from that, it’ll still fit into most backpacks and carry-on cases while also offering larger sizes than most tablets.

This is the largest and heaviest device you’ll buy if you want it to be portable, so be prepared for that. It is more convenient for mobile devices to have a USB port for charging than for laptops to have a typical AC or DC wire.

Expect no clear winner in the battle between tablets and two-in-one laptops. Because each portable comes with its own set of pros and cons, the best portable for you will depend on your specific requirements.

For those who don’t need a ton of processing power and are content to work around the restrictions of mobile apps, a great tablet might be a better choice if you don’t plan on using it for anything that necessitates a more flawless workflow or simply prefer portability. Apple’s Magic Keyboard and Samsung’s S Action Mouse are examples of accessories that can be added to your device, but only if you’re prepared to fork out the extra money.

In contrast, 2-in-1 laptops have all the appropriate tools for those who need a portable that can handle their everyday work and creative duties in a much more immersive fashion, from their range of ports and modes to their full operating system and more powerful engine. Even if they aren’t as light and thin as tablets, they are still portable enough that you’d be pleased to bring them along on your daily commutes. 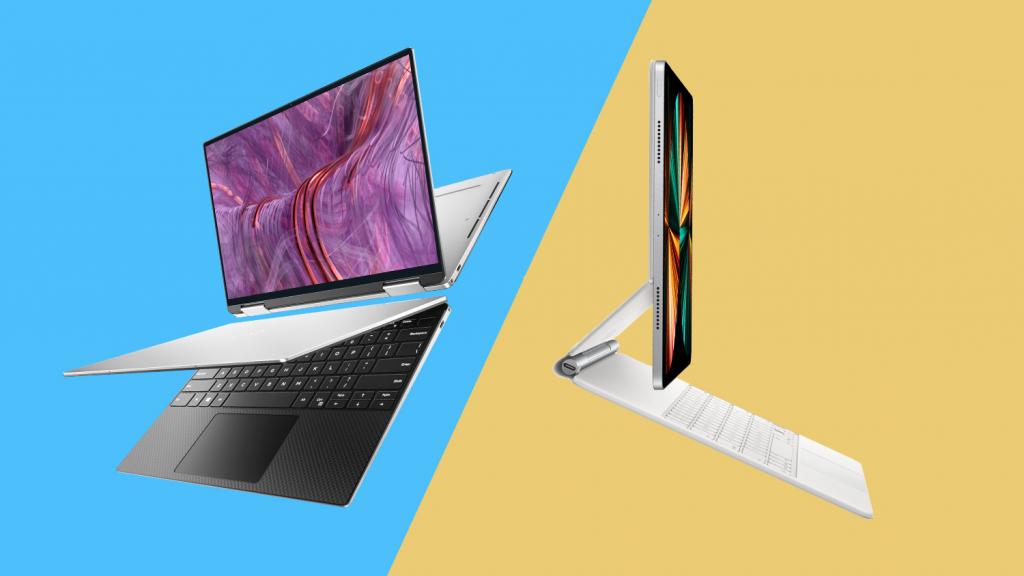 Which one is better laptop or tablet?

Due to this, laptops are more powerful than tablets, allowing them to run many applications at once. As a result, computers are a great tool for multitasking. Compared to tablets, laptops have more storage space because they employ traditional hard drives.

What’s the difference between a 2-in-1 and a tablet?

The 2-in-1 is a slimmed-down laptop with a touchscreen and a detachable keyboard, whereas tablets have emerged as an extension of the smartphone ecosystem.

A Windows 10 laptop’s processing power and keyboard can be found in these revolutionary gadgets, which are sometimes referred to as “convertible” or “hybrid” computers. Use your 2-in-1 as a tablet or detach the screen when you’re ready to play games, read an e-book, or stream movies on the go!

With all of this in mind, we can highlight several important advantages and downsides of both of these sorts of gadgets, and these are the ones you should primarily consider when making your choice.

Laptops that can be used as two devices in one:

Although 2-in-1 laptops and laptops in general aren’t as good for gaming as desktop PCs due to inferior hardware and low cooling efficiency, external graphics cards can overcome these drawbacks significantly. As a result, they deliver performance comparable to that of a desktop computer on a laptop.

Tablets and 2-in-1 laptops have a lot in common in terms of pricing, but if you’re looking for the best bang for your buck in the lower price ranges, the tablet is generally the superior option.

As a result, you now have all the information you need to make an informed decision between a 2-in-1 laptop and a tablet. You can tell us which of the two you choose and why in the comments below!