AOC G2460PF Review. Everything You Need To Know

If you’re looking for a high-performance, cheap gaming monitor, the AOC G2460PF is your best bet. It’s packed with features, including an ultra-fast TN panel and an excellent implementation of FreeSync.

Additionally, it does a respectable job of handling colors, however it falls short of IPS or VA displays in terms of visual quality.

There’s a good reason why TN panels are so popular around the world. In addition to being the cheapest to make, they are also the fastest, making them the ideal choice for more affordable low-end monitors. So it’s no surprise that so many TN gaming monitors are on the market that manage to strike a good mix between cost and performance.

AOC’s G2460PF is an example of this. This 144 Hz monitor is an excellent choice for budget-conscious gamers who want to upgrade their setup but don’t want to spend a lot of money.

Gamers, more than anybody else, crave speed and power. G-Sync, FreeSync, and high refresh rates illustrate that in the domain of enthusiast computing, motion quality reigns supreme. More than resolution, picture clarity, or even color fidelity, it is sought for. Although this isn’t a big deal, newer screens tend to adhere to industry standards right out of the box. 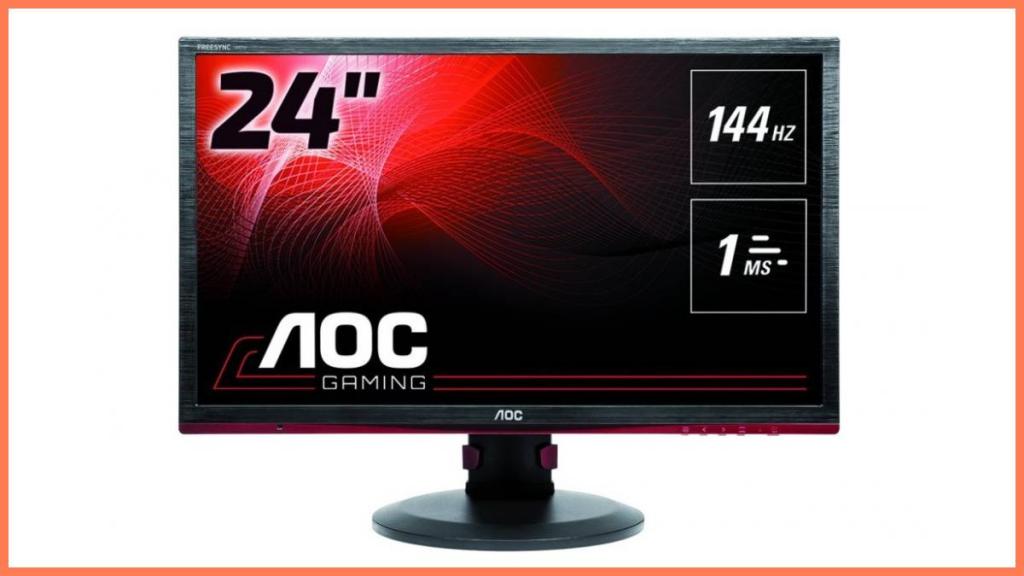 You’ll notice that I don’t have that value listed. As several readers have pointed out, gaming monitors are now quite pricey, and as a result, many purchasers are holding out for reduced costs. That’s what we’ll be looking at today.

TN-based Freesync displays have entered the 24-inch TN market, which was previously dominated by pricey, fast-refresh panels like the Asus VG248QE. 144Hz and adaptive-sync make these monitors practically unbeatable. For all the talk about the proliferation of such devices, it seems producers are focusing their efforts on the higher end of the spectrum.

The AOC G2460PF utilizes the same AU Optronics TN panel seen in the majority of new 24′′ 1080p 144Hz 1ms TN gaming monitors, making it a great value for the money.

The AOC G2590FX, for example, has a little greater color gamut, better viewing angles, and a slightly higher brightness than comparable 24′′ TN models.

With that said, the AOC G2460PF has a poor picture quality out of the box, thus calibration is required for the best possible viewing experience.

Most gaming monitors in this price range come pre-calibrated, but newer ones have a somewhat better picture.

Because of the lack of brilliant colors, higher contrast ratio, and wider viewing angles, the AOC G2460PF’s visual quality will never be as good as that of IPS and VA monitors.

The G2460PF isn’t afraid to call itself a gaming monitor. The red accents and the brushed metal texture of the bezels are enough to tell you it’s a Samsung phone. There are two camps when it comes to gaming products: those who favor attention-grabbing elements and forceful highlights, and those who want a more basic and understated design.

The base of the stand is circular, and it can be adjusted in height, tilt, swivel, and pivot completely. The monitor is compatible with any 100100 VESA stand or mount, as it is, of course, a VESA stand. You won’t have any issues if you ever need to replace the stand or mount the monitor to a wall.

The AOC G2460PF is just as good as the latest 144Hz monitors in terms of performance. Having only a 4ms delay in input, it is practically undetectable. 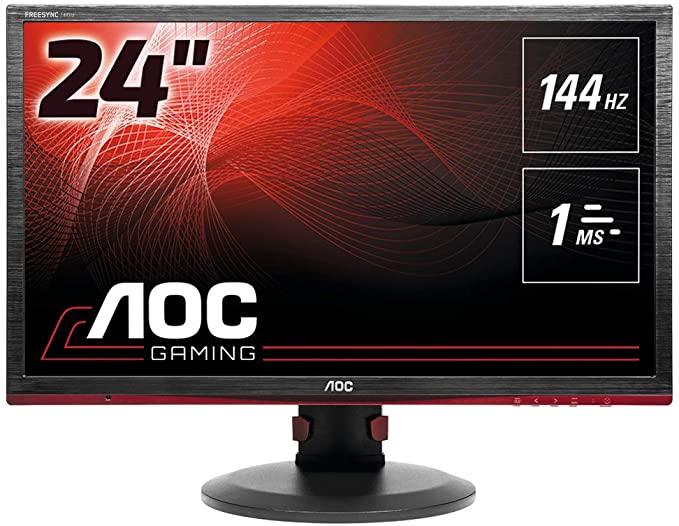 With a response time of just one millisecond (GtG, or gray-to-gray pixel transition), you can expect buttery smooth gameplay in competitive first-person shooter games.

Using the OSD (On-Screen Display) menu’s overdrive option, you can select one of five different response time speeds (Weak, Light, Medium, or Strong) based on your frame rate.

Despite this, we found that the medium option works best for the vast majority of cases.

Moving on, the AOC G2460PF monitor’s 24″ 1080p screen has a respectable pixel density, which means you’ll have lots of screen space and see fine details.

At the same time, 1080p won’t be as demanding on your CPU/GPU, thus you’ll be able to play eSports games at a higher frame rate.

AMD FreeSync is supported with a wide VRR range of 35-144Hz via DisplayPort and 35Hz-120Hz over HDMI on this monitor. A custom resolution will be required to get 120 frames per second through HDMI on this display.

Forget about screen tearing and stuttering for good thanks to this technology, which synchronizes the refresh rate of the monitor with a compatible GPU’s frame rate and so eliminates it without reducing input lag as much as VSYNC does.

The G2460PF’s display is a TN screen, as previously noted. We’re talking about a refresh rate of 144 Hz and a reaction time of 1 ms, which provides for a level of responsiveness and fluidity that you just can’t get from a 60 Hz display.

There are two major limitations of TN panels, however: poor color fidelity and limited viewing angles. This is a good test for the G2460PF.

In terms of color accuracy, this monitor does a better job than the ordinary TN panel, however some calibrating may be necessary. If you’re looking for a high-quality display, you’ll have to look elsewhere. There are no surprises when it comes to the monitor’s viewing angles; they are as narrow as you might expect.

Overall, the monitor boasts superb contrast and a maximum brightness of roughly 350 nits, making it ideal for gaming. Contrast may be improved, however the backlight bleed is particularly obvious in low light.

However, it is clear that the G2460PF is primarily a gaming monitor. However, the reduced viewing angles and worsening images will be a trade-off for a responsive gaming experience. However, if you’re on a tight budget, you’ll have to make a choice between performance and visuals: IPS or VA monitors with high refresh rates are the only option to achieve both.

The G2460PF has adaptive sync, or AMD FreeSync, much like any other high-refresh rate monitor. When it comes to cheaper monitors, there can be problems with FreeSync, but not with this one. As a result, we can’t expect for much more than 35-144 Hz with DisplayPort and 35-120 Hz with HDMI.

It’s also worth noting that Nvidia’s GPUs now support FreeSync. Due to its unofficial support status, the G2460PF cannot be guaranteed to perform properly with an Nvidia GPU. G-Sync monitors are a good option if you have an Nvidia graphics card, even if they are a little more expensive.

Stereo speakers with an RMS of 2W are included in the AOC G2460PF, which is the norm for monitor speakers. They are, however, just like most monitor speakers. Certainly, they are a nice feature to have, but since they sound flat and lacking in punch, you’ll need dedicated speakers if you want proper speakers. 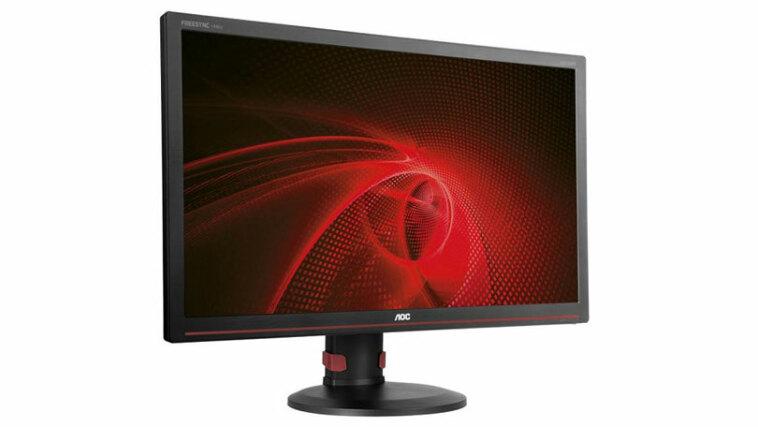 In addition to FreeSync, there are other other gaming options to consider.

If you have difficulties sleeping at night before using the monitor, you will have to manually establish a Low Blue Light mode by decreasing the brightness and emission of the blue color in the OSD menu, as there is no Low Blue Light mode on most new monitors.

If you’re sensitive to flickering, you won’t have to worry about the backlight. Color temperature, brightness/contrast, gamma (three settings), etc. are all included.

There’s also a tool called Shadow Control, which brightens up the shadows to make them more visible.

Also included are i-Menu, Screen+, and e-Saver, which let you to customize a desktop app’s OSD settings for increased multitasking efficiency (to adjust monitor sleep, shut down, and screen saver timers, etc.).

This 144Hz gaming display from AOC is an excellent value for the money. But if you can afford it, we prefer a newer 1080p 144Hz model for superior quality and viewing angles. Gamers have been flocking to AOC’s G2460PF 24-inch 1080p 144Hz 1ms gaming monitor.

It has an AUO 144Hz panel (variable with Adaptive-Sync). With the great majority of 24″ 144Hz displays currently using this panel, we’ve become rather familiar with it.

Does the AOC G2460PF have a DisplayPort?

Refresh rate of at least 120Hz reduces blur and sharpens the picture for a more realistic experience with AMD FreeSync Premium.

DisplayPort is a type of hardware interface

Do you think that the AOC G2460PF is a good monitor all in all?

It all depends on what you’re hoping to get out of the experience. With a list price of around $200, it should be clear to whom this 144 Hz TN display is targeted. Specifically, gamers who seek the greatest possible performance without spending a lot of money on a high-end gaming display.

Although the G2460PF is fast, it lacks the fluidity you’ll get on a typical 60 Hz monitor or TV. FreeSync is very well-implemented and works over a wide range of frames per second (FPS). As a result of that, there’s basically nothing to complain about in terms of performance.

However, the AOC G2460PF has the same technological limitations as every TN panel, as was previously explained. There are two major drawbacks to this monitor: its limited viewing angles and poor color reproduction, which can’t match with an IPS or VA panel in the same price range.

You’ll have to choose between visuals and performance when you can’t afford a more expensive display that gives you the best of both worlds. No complaints if you’re ready to forgo color accuracy in exchange for a high framerate.

The AOC G2460PF has no serious flaws other than that. We’re not huge lovers of this technique, but that’s purely a matter of personal preference.