It is likely that you have come across the terms single-channel, dual-channel, and quad-channel in your research into PC construction or on one of the many computer forums. But what exactly are they referring to?

Despite the fact that it may appear difficult, the answer is actually fairly straightforward. What are the distinctions between the three RAM configurations we’re going to discuss today?

Multiple modest capacity memory sticks rather than one big capacity stick can make a significant impact. The memory capacity will remain the same, but the memory bandwidth will increase by a factor of two or four. 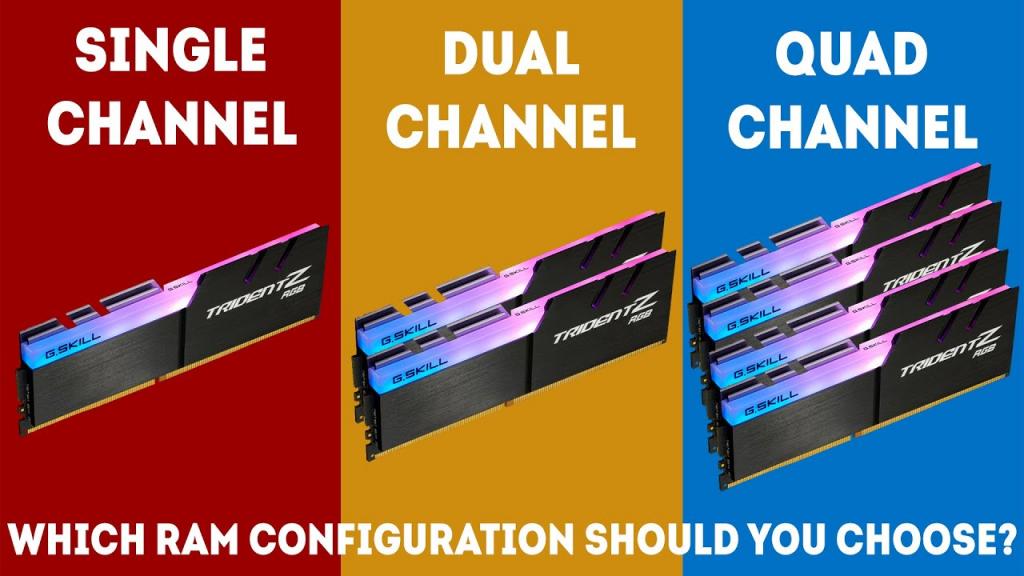 Reasons Why Dual-Channel and Quad-Channel Setups Are Worth It

The first and most obvious reason to choose a dual-channel or quad-channel kit over a single high-capacity RAM module is the price..

In other words, buying several lower-capacity RAM sticks instead of a single high-capacity one can save you some money. Lower-capacity modules are cheaper to produce, therefore a 2×8 GB or 4x4GB kit will end up costing less than a single 16GB RAM module.

As if that wasn’t enough, multi-channel configurations can save you time in the event of a hardware malfunction. Even if one of your two or four RAM sticks fails, your PC can still run until you can get a replacement.

For this reason, if your PC is equipped with only one large module, it will be inoperable until you can purchase a new one.

Aesthetics are, of course, an important factor to consider. Although it may not be as important to most people, it’s still important. For those who prefer open systems or transparent cases, having all four of a motherboard’s DIMM slots filled with RAM modules looks sleek and solid, especially if they have well-designed heat spreaders or RGB lighting.

Lastly, future-proofing is one of the reasons why you might not want to fill up all of your DIMM slots at once. In 2020, 8 GB of RAM is the suggested minimum for gaming, so if you’re building a new gaming PC and planning to stick with 8 GB of RAM, you might want to allow some room for expansion.

Even though 16 GB doesn’t go out of style soon, you never know if you’ll need more space down the road if you plan on using professional applications.

Test Results & What They Mean

Single channel memory setups had CPU use that ranged anywhere from 10% to 25% greater than dual channel memory configurations, yet this graph does not indicate that difference. As a result, I believe that the additional memory bandwidth in twin and quad channel setups alleviates some of the CPU’s stress. That’s what I’m seeing at first sight, although I could be very off base.

It’s possible that a low-cost processor would suffer a performance hit while running in single channel mode instead of dual or quad channel mode, but even then, I doubt it would be significant.

Despite the fact that my testing methodology wasn’t the strictest and that it might be more appropriate for the same tests to be run on a more budget-oriented gaming PC, I believe that this shows that dual channel configurations aren’t that much better than single channel configurations, at least when it comes to gaming.

Dual Channel vs. Single Channel Memory: Not That Big of a Difference for Gamers?

Dual-channel memory’s increased memory bus and bandwidth may have played a role in this. All in all, the difference between single and dual memory channels for gaming is negligible.

Should I Just Stick to Single Channel Memory Then?

There is no visible difference between running your memory in single and dual channel configurations for gaming, according to the results of the tests above.

Of course, this does not rule out the possibility of using dual channel setups. Dual-channel arrangements can be useful in some situations:

Dual Kits May Be Less Expensive than Single Kits.

It’s possible to find a dual-kit of RAM for less money than a single stick of RAM on occasion, especially during sales. Single sticks of RAM are typically less expensive than twin kits in terms of cost.. PC hardware sales, by contrast, are awash with hundreds of deals every day, from a variety of different manufacturers, from all over the world.

This means that you should buy two kits of RAM instead of just one, because the price difference is negligible in the long run.

However, you should also think about the number of RAM slots on your motherboard and your current budget. A single 8GB stick of RAM may be preferable to two 4GB sticks if your motherboard only has two DIMM slots and your budget only allows for eight gigabytes of RAM.

Adding another 8GB stick of RAM would be all it would take to get to 16GB of RAM if you ever wanted to. A new 16GB kit would be necessary if you had gone with dual 4GB sticks instead of the single 8GB stick.

Using Two Channels at Once for Aesthetic Benefits

The aesthetics of your build and the price difference between a single stick of RAM and a twin kit (or quad kit) of the same capacity may lead you to try to fill up your DIMM slots.

This is an experiment for another day; nonetheless, in professional programs (editing, design, CPU-heavy jobs, etc.), there is a noticeable difference in performance between single and multi channel memory configurations.

So, if you plan on doing any of those things with your computer, you may benefit from adopting a multi-channel RAM arrangement. 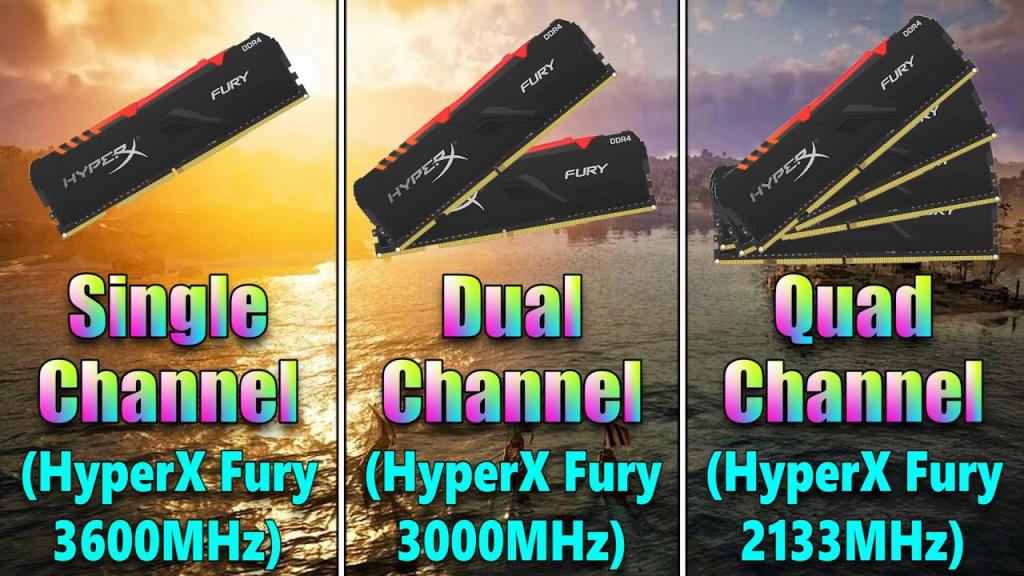 What Does Single, Dual, and Quad Channel Even Mean?

All of this, however, depends on your system’s settings. Three memory sticks are also possible on your PC. However, this setup is not supported by many systems. This means that the system will run two RAM sticks on a dual channel and the rest on a single channel in such a circumstance.

Single-Channel vs. Dual-Channel – Does It Matter?

Since then, when creating a PC, people tend to forget about RAM. More memory is preferred above a channel type by most people. It’s understandable, too, in a way. However, it’s a mistake to use quad-channel memory sticks with a dual-channel system. As a result, there may be compatibility or stability problems.

If you’ve ever observed, most laptops use a single memory stick instead of dual-channel memory. Do you have any idea as to why this is the case? According to rumors, computer manufacturer MSI claims that the difference between single- and dual-channel RAM is minor, at least in terms of performance.

It’s why most laptops have just one memory channel. Aside from the fact that both memory channels have their pros and downsides, the difference between them is insignificant.

Which memory type should you go for?

What distinguishes these layouts from one another? Getting to the RAM slots is as simple as opening the case and looking about. A single-channel configuration is appropriate when dealing with a single RAM stick. Depending on the number of channels, it can be either dual- or quad-channel.

Now, it’s easy to tell them apart, but what are the actual differences in performance? To what extent does having many channels increase performance, or is this just another way for hardware manufacturers to extort money from gamers?

What Do Different Channel Configurations Mean For Performance?

That’s the gist of the idea, that employing two or four smaller sticks would be more efficient than using one large module.

Single-channel, dual-channel and quad-channel are all analogous to roads or highways, respectively, with single lanes, two lanes and four lane configurations. Only so many vehicles can pass at once on a one-lane road, no matter how beautifully constructed it is. However, if we expand the number of lanes to two or four, the number of vehicles that may pass in a given time frame increases exponentially.

More is always a good thing. However, in practice, does it make much of a difference?

Hardware stats alone can’t tell you much about performance because it relies on what the RAM will be used for, whether it’s for gaming or memory-intensive professional software.

It’s hard to say if many RAM modules in dual-channel or quad-channel setups are better for gaming, as the benefits can vary widely from one individual to another and from one game to the next.

When it comes to gaming, some believe that multi-channel RAM arrangement gives a smoother and more efficient experience; whereas others can’t even notice the difference if there is one!

Dual- and quad-channel RAM systems only deliver a small increase in gaming performance when compared to single-channel configurations, according to benchmarks.

Even the most memory-intensive AAA games are not exempt from this. Aside from a few small tweaks, the show is nearly similar. For the most visible speed gain, it would be a good idea to focus on the GPU and CPU, as they are the two most important parts of any gaming PC.

However, this does not rule out the possibility of using a dual or quad-channel configuration. Quite the contrary, in fact. 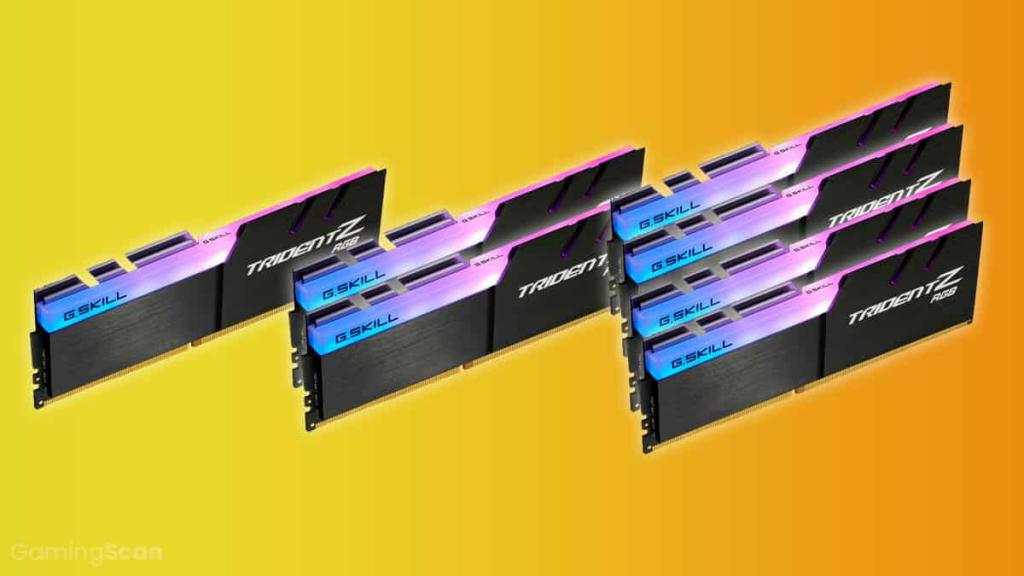 According to a PC’s RAM configuration (i.e. single, dual, or quad channel), a PC can have one, two, or four sticks of RAM installed.

As a result, a multi-channel arrangement in a gaming PC may make sense because smaller RAM modules are more economical, and you’ll always have another module to fall back on if one of them fails.