NZXT H440 Review. Everything You Need To Know

The H440’s release by NZXT marked a turning point in the company’s history. The H440 marked the beginning of a new era in case design for the corporation, culminating in the current H-Series of products.

Despite the lack of optical bays, the NZXT H440 is praised and criticized for its minimalist, elegant appearance; a bold move that has been both appreciated and lamented. For the most part, the case’s frame is made of steel and features plastic accents.

A scratch-prone acrylic window is used on the side panel, but it does a good job of hiding HDD bays and fans while still allowing a good view of the vanity PC components.

The PSU shroud, branded with “NZXT” and designated in a two-tone color scheme, is arguably the first thing one notices when looking inside the chassis. You can also put your 2.5″ SSD sleds here, since there are two holes for that purpose. 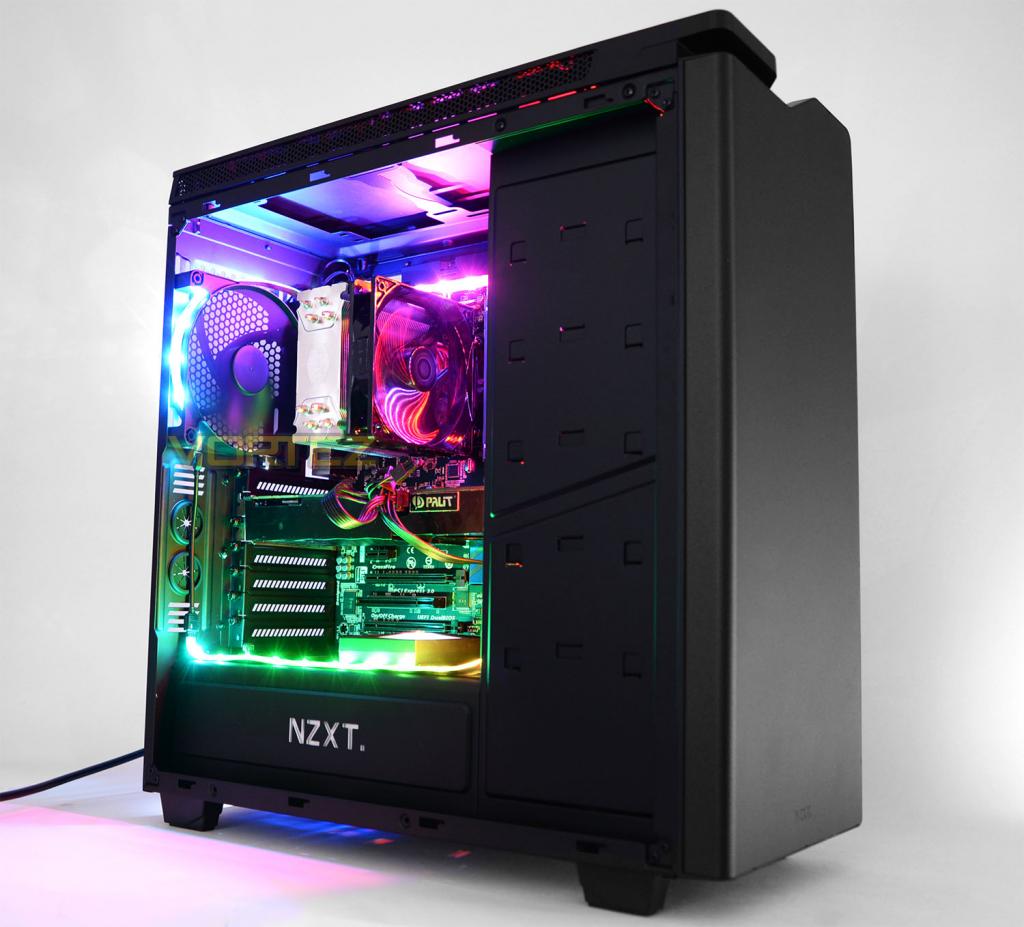 There are five 3.5″ HDD drive bays at the front. Alternatively, three 120mm fans or a 360mm radiator can be used in their place. HDDs can be mounted on the floor of the case if you choose this option.

There are two 140mm fans and three 120mm fans on the top, which may be used to install either a 280mm or 360mm radiator, depending on your preference. One 140mm fan may be found in the back. Sound-dampening material on the side panels and a fan hub that can connect up to eight fans are also included. The H440 comes pre-installed with four fans: one 140mm exhaust fan and three 120mm intake fans.

Building Inside the H440

There are only a few drawbacks to working within the H440, and they are minor. Easy to put in because of the standoffs and enough area between the motherboard and back of chassis for your hands to reach inside of the case.

There are numerous zip-tie and tie-down points included as part of NZXT’s sincere attempt to assist you in reducing cable clutter. H440’s design also has a good amount of channels to route cables. Aside from that, the side panel and motherboard tray only have a limited amount of space between them, and the sound dampening material takes up a lot of this space.

If you plan to use motherboards with massive “armor” or heat sinks, you should keep in mind that this can take away from the available space on top of your case, making it harder or impossible to attach radiators. When huge motherboards try to encroach on the narrow top clearance, things become ugly fast.

With time, the usefulness of optical drives has decreased as two major patterns have emerged. As a result, hard drives have grown in size and capacity, allowing for more storage at a reduced cost. So you can store a lot more data on a single drive now. Second, the way we consume media has shifted. Movies are streamed, games are downloaded, and files are backed up to those bigger, cheaper hard drives, either locally or in the cloud.

There is a shift in the way data is transferred from CD or DVD to your hard drive. When an optical drive is required, a single external device can accommodate all of your systems.

5.25-inch optical drive bays are being phased out by PC case manufacturers (although they aren’t the only peripherals this decision affects). For starters, we tested the NZXT mid-tower H440, which bridges the gap between the H230 and H630 models from the firm. The H440 is available in two color schemes: white with black accents, or black with red accents. The factory-installed features include noise dampening, a wide window, and plenty of fans.

NZXT replaces the 5.25-inch bays in this chassis with more interesting features. Hard drives are installed differently, there are power connectors for up to ten fans, and the interior is divided into several sections. The H440 is a great choice if you prefer your computer systems to be neat and tidy on the inside. According to the manufacturer’s website, “Remarkably Clean” is the case’s tagline.

The H440 from NZXT has a sleek appearance with lighting that is both visually appealing and functional. NZXT’s H440 is a one-of-a-kind enclosure with a slew of features for enthusiasts who don’t care about 5.25-inch drive bays but still want a quiet (albeit not silent) case.

Packaging and In The Box

At the time we received the NZXT H440, it hadn’t yet been released. Due to the lack of retail wrapping, we were unable to open the case and show off its contents one by one.

There was no written NZXT manual, so we just received a large number of screws, a few wire ties, and a stiff metal foil NZXT sticker to help with motherboard spacer installation.

There are seven PCI slots.

Card for Displaying Graphics
Protruding cables (with or without hard drive bays) can extend up to 30/40 cm.

Source of Energy
Protruding cables can extend up to a height of 40 cm. Features and Specifications of the NZXT H440

If you haven’t been following our H440 coverage, you may not be aware of the case’s most appealing features: It has a built-in PSU shroud and no external 5.25′′ drive bays. To my knowledge this is the first time that a power supply shroud has been incorporated in a mid-range ATX case that costs less than $120. I’ve only seen them in high-end enthusiast cameras (like the 900D and 1900), not at this price point. In addition to hiding the second-ugliest part of the case, the drive scaffolding, the inclusion of a shroud ensures the concealment of messy wiring (particularly helpful if you use a non-modular PSU). The H440 conceals the unattractive nature of racked hard drives by terminating the PSU shroud in a steel wall that covers all drives on the left side.

H440’s front panels have a thick, semi-functional foam cushioning (save for where the window is present) for added comfort. These cases are similar to the company’s H630, a discrete case with sound-absorbing padding as a selling point. With our test system’s Thermaltake Frio Advanced (which is incredibly noisy), we found the foam to be ineffective, but it functioned reasonably well with a more modest CPU cooler.

In any case, we had similar experiences with the H440. Although it’s a lovely addition, the cushioning doesn’t do much for systems with a lot of volume.

The H440 is full of thoughtful details, and it’s those little details that really set it apart from the competition. Because the side panel and PSU plate both feature locking thumbscrews from NZXT, removing them does not necessitate removing all of the associated thumbscrews (they stay locked onto the panel even when you remove it). It’s a convenient way to keep track of stuff. Underneath the front panel is a magnetic dust filter that can be cleaned without the need for screws. You can use the fan connector hub on the backside of the board tray to connect all of the case and system fans without having to rely on the motherboard. For the most part, the H440’s design is focused on making things easier to put together.

The casing is superbly constructed. Everything is substantial and long-lasting. All of the panels are made of solid metal or plastic, and NZXT has finally replaced the plastic drive cage sleds I’ve been complaining about for the last four reviews with metal sleds. When compared to comparable white cases, this case’s glossy paint seems to be resistant to smudge and imperfections (and perhaps more resilient to light-aging as a result).

Simply put, working with NZXT’s H440 was a blast. It’s easy to get bored of building and re-building the same computer over and over again if you do it frequently. With each new function I discovered, the H440 piqued my curiosity in an entirely different way.

Simply stuff the surplus cable behind the PSU and tie it down behind the motherboard to keep it from tangling up. Video card power cables and FP connections can be routed through the PSU shroud’s cutouts, but the rest of the components must be routed through the board tray. The 24-pin cable I used barely fit under the right side panel, thus a few more millimeters on that side would have made a world of difference in routing options. 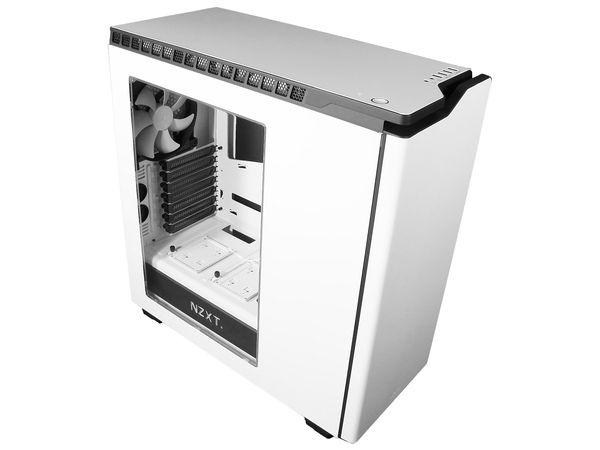 The only other issue I have is with the case’s power 4-pin MOLEX connector. Even while MOLEX headers can be found in some current chassis, I’d rather not have to plug one into my power supply at all. It would be ideal if the power connector could be changed to a SATA one.

Does the NZXT H440 come with fans?

NZXT’s new FN V2 case fans are included in the H440’s basic package. An unprecedented 3x120mm in front and 1x140mm in the back.

This is a high-quality case with a lot of great features for a low cost. The NZXT H510 is a good case for most individuals building a mid-range PC today, and we believe you will too. When it comes to airflow, you can choose the H510 Flow variant.

NZXT’s flagship case, the H440, was initially priced at $120. There are still plenty of H440s on the market for as little as $80, and they’re still popular. Case tooling trends like PSU shrouds, and a cleaner front panel without optical drive support, were established in large part by the H440.

As a sort of spiral successor, the H-700 from NZXT comes highly recommended by us but comes with a hefty price tag of $150. While it’s not perfect, the H440’s cutting-edge features, plethora of cooling choices, and largely metal design make it an excellent value.

External drive support may be a deal breaker for some users. More space for cable management may have been provided in the H440’s design. Finally, the H440’s acrylic window is no exception; even with gentle cleaning, it is easily scratched.

That so, the H440 is a fantastic pick for individuals who are ready to put up with its flaws.