Razer Naga Trinity Review. Everything You Need To Know

In the field of mice, Razer’s latest product is the Razer Naga Trinity, which combines a number of earlier models. The Naga Hex and Chroma may be familiar to you if you’ve ever owned one. Well, if you did, you’ll recognize the Trinity.

So what’s the big deal with the Trinity? Razer has essentially stopped the Hex and Chroma brands of popular mice that it has been manufacturing for years.

Afterwards, it added in a two-button layout similar to the traditional Razer DeathAdder – which is still being produced, unlike the other two models

In the end, three interchangeable side panels resulted in a new form of mouse. In this review, we’ll tell you all about the Trinity mouse, including how it works, its advantages, and if it’s a good purchase.

What Is the Trinity?

The side panels that come with the Trinity will be familiar to anyone who have followed the Razer mouse series for a long time. 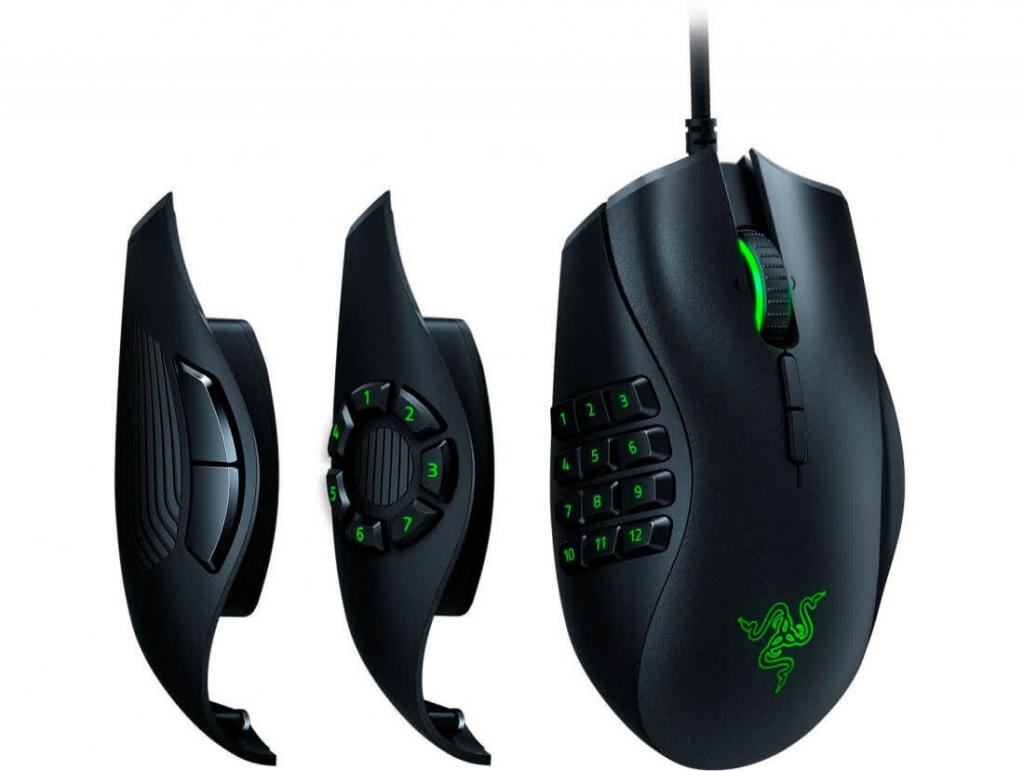 As far as we can tell, Razer has decided to focus on the Trinity rather than continuing to produce and market both the Hex and Chroma lines of gaming peripherals. The only difference between the Chroma and the Hex was the amount of buttons.

The Trinity was the product of this experiment.. Razer, of course, threw in a two-button layout as well. While most gamers like to have more than two side buttons, this is an acceptable arrangement when you don’t.

When you’re not gaming, you can quickly swap out one panel for another if you find that the extra buttons are a hindrance.

As a result, if you were a fan of either the Hex or the Chroma, you’ll enjoy the Trinity. There is a lot of overlap between these two goods.

According to our knowledge, the Trinity gaming mouse currently on the market has interchangeable button panels.

Historically, gaming mice have had a wide range of interchangeable features, such as weights and finger rests, although these are typically located in less sensitive areas. This is a bold move on Razer’s part to make an integral part of its mouse detachable.

As a result, we are unable to comment on its long-term viability if you frequently change the panels.

There was no noticeable difference in durability between the Hex and the Chroma that we’ve previously utilized.

In principle, the Trinity isn’t all that different from its prior incarnations, providing it can manage the swaps it’s supposed to. Even while purchasing the Trinity saves money over purchasing each individual mouse, we doubt that many individuals would go to that length.

In addition, Razer no longer sells the Hex or Chroma — at least not in new versions – but the business does occasionally sell reconditioned models.

Razer no longer makes its own devices, although you can find resold ones on places like Amazon and Newegg.

Razer’s only two Naga options are the Trinity and DeathAdder, the latter of which comes the closest to the Trinity’s two-button layout. The DeathAdder, on the other hand, is not a Razer Naga mouse in the strictest sense. They still have plenty of other mice to look at, though, as they have in the past. 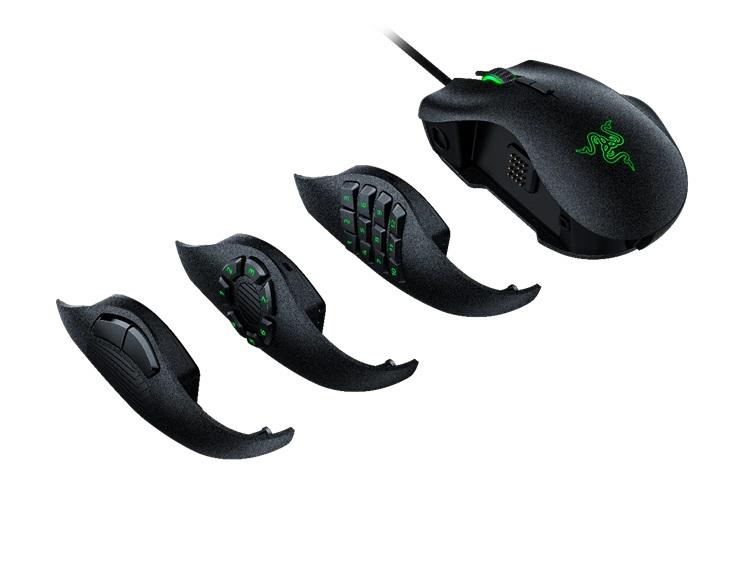 The Trinity, on the other hand, sports a 16,000 DPI 5G optical sensor, whilst some of its elder brethren employ solely laser sensors.

There is no need to use entire 16,000 DPI on this mouse, but for those who prefer future-proofing as well as bragging rights, this mouse has it.

The negative is that it is still a Naga. The Razer MMO mouse has never been one of my favorites, and I don’t mean that in a disparaging way. Neither the palm nor the claw grip fits well in my small and wide hands. In my opinion, it’s not long enough for the former or thin enough for the latter.

However, if you’re a fan of the Naga, nothing has changed. There are two DPI buttons behind the scroll wheel and an overemphasized ring finger/pinky grip on the Naga Trinity.

In addition to the normal places, such as on the scroll wheel, on Razer’s emblem, and on the left-hand side, it has Razer’s RGB lights.

That takes us to the most essential aspect of the Naga Trinity: the left side.

Because of its name and what I said at the beginning, the Naga Trinity is really three mice in one. Right-handed users will have no problem using the left side of the mouse. It’s so well-masked that you’d never guess it was there just by looking at it. A tiny push is all that is needed to remove the entire panel that is kept in place by two small magnets. It’s just a few gold contacts that tell the mouse which panel is attached.

It’s a cinch. In the previous few years, I’ve used a lot of customizable mouse, but most of them only enable you to change out the thumb rest, not the buttons themselves. The Roccat Nyth mouse, which did allow me to switch button layouts, required me to manually replace each button one at a time.

The Naga Trinity is fast and easy enough that I’ll actually use it, and it gives you a variety of possibilities. The 12-button numpad design made famous by Razer years ago is the default design for the Naga Trinity. Each of these buttons has a slightly different form than the 2014 version, which makes it easier for your thumb to perceive them. Not that it makes a difference—anyone who can master the 12-button Naga continues to impress me.

You get a full 19 buttons, including the 12 on the side, plus the normal left-, right- and middle-clicks, as well as the DPI buttons and a tilting scroll wheel that debuted on the 2014 Naga.

Is there an excessive number of buttons on the device? Naga Hex, which has seven buttons arranged around your thumb, may be installed by peeling off the 12-button Naga design. This is my preferred Naga. Even though it doesn’t have as many buttons as my preferred mouse, the 12-button Naga, I find this one to be more user-friendly. Instead of trying to distinguish between rows of similar keys, moving your thumb in the direction of a button makes it far easier to create muscle memory.

For most people, seven thumb buttons is more than sufficient. Two is generally enough for me.

It’s true that the additional functionality can come in helpful on occasion. In addition to MOBAs, I’ve found that the Naga Hex’s seven buttons work well in strategy and battle royale games, both of which have a large number of helpful keyboard shortcuts. Many of the commands in Playerunknown’s Battlegrounds and Fortnite can be mapped to a thumb button, which makes it much easier to use.

The Naga Trinity’s true appeal to someone like me is that you can switch in a basic two-button panel instead of the seven buttons.

Because it’s still shaped like a Naga, I doubt this will ever displace my current favorite, the Logitech G502. But if you’re a fan of the Naga and have wanted a simplified form for shooters, puzzle games, or whatever—basically, a mouse that doesn’t threaten to trigger twelve hotkeys every time you move it around—this stripped-down panel seems like a treasure. It transforms the Naga from a novelty mouse to an all-purpose device that can be used for a wide range of activities.

For the first time, I can also say so regarding the sensor. Razer’s outdated laser sensors have been used in Nagas until now. Razer’s PWM3389, a semi-proprietary version of the PWM3360, is presumably used in the Naga Trinity, making it the first gaming headset to employ an optical sensor. To put it another way, it has a higher resolution of 16,000 dots per inch, but odds are you won’t use it. All you really need to know is that it’s a variation of a really good sensor, and a significant upgrade over the original laser-equipped Naga and Naga Hex.. 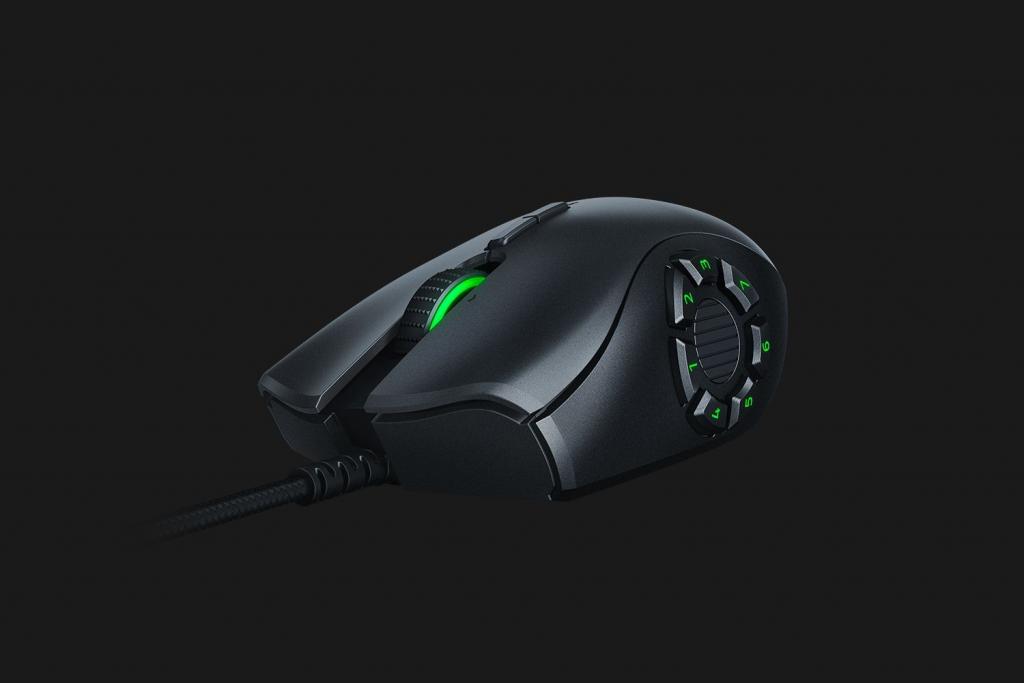 Designed for gamers, the Razer Naga Trinity offers a distinct design. RGB zones are available on the logo, wheel and side buttons of your device. If you opt for the side attachment with only two buttons, it won’t be very flashy.

The construction of the Razer Naga Trinity is excellent. Even though it’s made of plastic, it feels solid. The mouse wheel wobbles a little when the interchangeable side panels are in place. However, the capacity to tilt it is most likely to blame for this.

Is the Trinity worth the money? The answer is a resounding yes if you were a fan of the Naga Hex or Naga Chroma back in their heyday.

In most cases, users who already have a familiarity with the Trinity’s buttons won’t need to swap panels very often, but those who are new to the system may find themselves making greater use of them.

The Trinity’s unique feature is that it can be used as both a laptop and a tablet.

The extra buttons on the 7-button and 12-button panels are unnecessary and may potentially be a hindrance to office or remote workers. The 2-button panel, on the other hand, resolves this issue.

Price is the biggest downside of the Trinity, alongside concerns about long-term durability. Additionally, the Trinity saves you money by combining the functionality of three mice into a single unit.

A little sticker shock should not come as a surprise if you’re planning to purchase from Razer. As a single mouse, it is more expensive than many other solutions available on the market today.

Because of this, we can confidently say that the Trinity is ideal for fans of Razer mice. To be safe, if you’ve never used a Razer mouse before, weigh the benefits and drawbacks carefully. This mouse is an amazing option, but there are a lot of other options out there as well.

Is the Naga Trinity worth it?

Because of its interchangeable side panels, the Razer Naga Trinity is an excellent gaming mouse that can be used for a variety of purposes. If you prefer first-person shooters or massively multiplayer online games, there is a button arrangement for you. It’s worth noting, though, that the Naga Trinity is an excellent choice for gamers that want larger, more muscular bodies.

How long does the Razer Naga Trinity last?

BATTERY LIFE UP TO 150 HOURS As long as you’re using Bluetooth or Razer HyperSpeed Wireless, this mouse can keep going for a long period of time.

Is the Razer Naga good for FPS?

The DeathAdder Trinity or the Mamba Trinity would be awesome if Razer went the other way and made a new form MMO mouse while preserving the strengths of the Mamba and DeathAdder. That would be a very interesting idea.