What Is V-SYNC And Should You Use It? Pros and Cons

Video game frame rates are synchronized to monitor refresh rates using the VSync graphics technology, which is also known as vertical sync. For 3D games with a lot of visuals, this synchronization ensures smooth, uninterrupted gameplay.

VSync was designed to eliminate screen tearing from the start by GPU engineers. Two “screens” of an image collide and fracture, causing a frame-rendering issue known as “screen-tearing.” In most cases, it will appear as if two separate images have been combined into one, creating a jarring ripped impression.

Screen-tearing ruins gameplay in an instant and compromises any strategy you may have had by no fault of your own. This results in blurry visuals when the refresh rate is out of sync. This happens most frequently with games that utilize refresh rates of 60 frames per second (fps) or more. An fps cap is put in place when VSync is enabled in order to prevent any mismatches in the pace of play.

If you use the RTSS (Rivatuner Statistics Server) to limit your frame rate to the maximum refresh rate of your monitor, you can considerably eliminate the additional input lag caused by V-SYNC.

You’ll need to know your monitor’s exact fractional refresh rate, which you can get from this page. 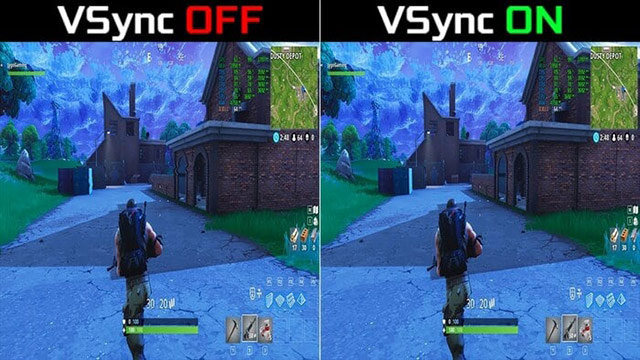 How To Turn It On

No vsync vs. using vsync

Uncapped frame rates and the most recently completed full frame are both possible because to the use of these two technologies, which have a shorter input lag than V-SYNC. Input lag, on the other hand, continues to be an issue.

Using a gaming monitor with a variable refresh rate technology, such as AMD FreeSync or NVIDIA G-SYNC, will reduce screen tearing and stuttering without a perceptible input lag penalty.

A great solution for gamers who have to deal with inconsistent frame rates and refresh rates is VSync. With VSync, your graphics processor and monitor are forced to operate together in perfect harmony. Screen-tearing is eliminated and gaming becomes more fluid thanks to this sync.

VSync is a terrific tool for gamers who love to play older games on their PCs using emulators, in addition to current titles. Older games, on the other hand, necessitate lower-quality visuals and slower performance. VSync slows down your frame rate to match the vintage specifications of your choice.

Increasing frame rates cause your GPU to go into overdrive, which results in a significant increase in heat generation.

With VSync enabled, the fps is limited to the monitor’s maximum refresh rate, which decreases the amount of stress on your graphics card.

Virtual-Synchronous (VSync) is fantastic for the visuals but a pain to use on an operational level. VSync’s lack of responsiveness is one of the most popular complaints from gamers. Delays in mouse and keyboard input may be game changers in games that require quick reflexes and reaction time. G-Sync and AMD’s FreeSync fill in the gaps here.

VSync will attempt to compensate if the frame rate drops below your monitor’s refresh rate during a graphically intensive point in your game. Instead of a smooth transition, VSync causes an even greater decrease in frame rate, resulting in significant lag in both visual appearance and overall performance.

A Recap of the Negative Aspects of VSync 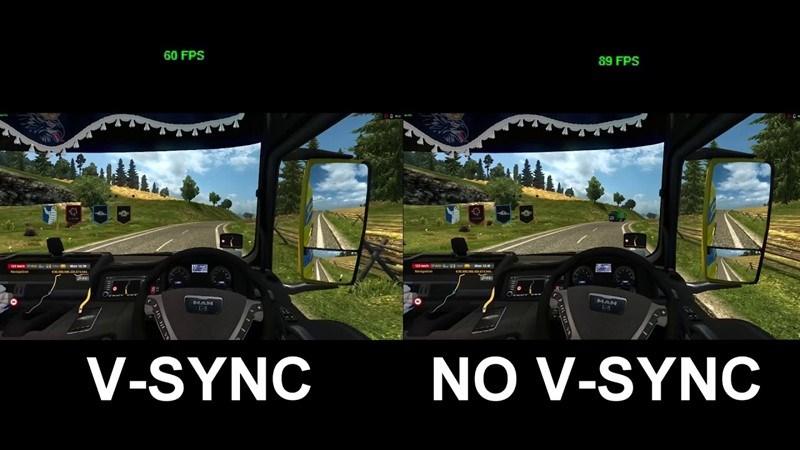 What is VSync technology?

A graphics technology called VSync (vertical sync) synchronizes the frame rate of a game with the refresh rate of a gaming monitor. This technology was first created by GPU makers as a solution to screen tearing, which occurs when your screen displays portions of multiple frames at once. When this happens, the screen will seem split down the middle, like in the image above. Because of this, tearing can occur when the refresh rate of a monitor (the number of times it refreshes per second) does not match the number of frames per second.

It can happen at any moment, but it is more common during fast motion, especially when a game runs at a greater frame rate than the monitor can manage or when the frame rate varies dramatically and the monitor cannot keep up. Fast-paced games with vertical picture features, such trees, doors or buildings, are more likely to have this issue. As a result, these lines will appear to be out of place and can detract from the overall beauty of the game, making it less enjoyable to play

There are a few things that VSync performs to help relieve this problem. There are a number of advantages to using a low-res display, such as limiting the frame rate output by the graphics card to the monitor’s refresh rate (60Hz, unless you have a high-refresh-rate monitor).

So, until the monitor has finished its current refresh cycle, it prevents the GPU from doing anything to the display memory, effectively not giving it more information until it’s ready. Because of VSync, you won’t ever see tears on your screen because it synchronizes frame drawing only when the refresh cycle is complete, so you won’t have to worry about that.

Does it make a big difference?

If you’re having trouble with screen tearing, the only thing VSync can do is lower your frame rate. VSync can make a major difference if your monitor isn’t able to keep up with the frame rate of a particular game.

Unlike HDR, though, VSync does not enhance your screen’s res, colors, or brightness. It’s a technique designed to stop a specific problem from occurring rather than to improve existing conditions. It also has a negative impact on productivity.

Your frame rate will be limited to the refresh rate of your display at best if you force frames to be fully rendered before they are displayed. Higher FPS helps alleviate input lag in some games, but it can also have an impact on your competitive performance.

What do I need to enable VSync technology?

To utilize VSync, you don’t require a specific monitor; it’s meant to operate with any display. You’ll need a graphics card that can handle it, however the most current generations of graphics cards have this capability built in. All games on Nvidia and AMD’s drivers support VSync, which has been around for a long time.

As an alternative, most games have a toggle option in their graphical options menu that allows you to turn it off or on for each individual game.

Does VSync have any problems?

While it may be useful and performing as intended, VSync is far from a perfect solution and may have an adverse effect on your gaming experience. It is possible to drop your frame rate drastically if you have a display and a game that don’t sync up. Input latency and stuttering might degrade the gaming experience as a result of this. In fast-paced games, such as shooters and fighters, screen tearing is most obvious. However, it can impact any type of game regardless of genre.

Because of this, enabling VSync may not be worth it if you’re a serious player of these kinds of games. While triple buffering may assist alleviate some of VSync’s issues, it does not come with any promises of success.

Every gamer knows how critical it is to have a well-rounded gaming setup. When it comes to playing video games, your PC is the powerful vehicle that transfers you with a simple power-on. To fully immerse yourself in a game that is both visually and mechanically engaging requires fine-tuning your requirements.

The level of detail and 3D rendering in today’s video games has increased to such an extent that the barrier between reality and virtuality is becoming increasingly blurred. VSync is a necessary for games like Red Dead Redemption and Assassin’s Creed, which have visual features that make them stand out.