ASUS MG278Q Review. Everything You Need To Know

Nvidia G-Sync is supported by the Asus MG278Q, which is one of the greatest gaming monitors on the market with its 1440p resolution and 1ms reaction time.

As a result, it’s a popular choice among gamers who care about graphics performance, however some may choose an IPS or a 240 Hz display instead.

If you’re a serious gamer, you’ll want the best equipment possible, but you don’t have to pay an arm and a leg to get there. As a result, many gaming displays are now more expensive due to the inclusion of FreeSync and G-Sync technologies.

For a display to be considered a “gaming display,” there are a few criteria that must be included. The first thing that has to be checked is the refresh rate of the screen. When even low-cost graphics cards can push FHD and QHD resolutions to 80fps or more, 60Hz is no longer sufficient. Overclocking isn’t necessary to get the best possible results, and the industry is responding to that reality.

Equally vital, though, is the ability to match frame rates in some way. Locking the video card and display together is the best technique to assure smooth movements. You won’t witness any stutters or tears produced by mis-timed frames reaching the display during its refresh cycle if you put the signal source in charge.

G-Sync was pioneered by Nvidia, and we’ve examined a number of high-quality displays incorporating the technology. But AMD’s FreeSync, which is an open standard that doesn’t require manufacturers to pay a license fee to use the technology in their products, offers the promise of value. It just adds functionality to the existing DisplayPort interface.

Most people think that the primary advantages of TN displays are their low price and high performance. However, not all TN displays are economical; in fact, numerous high-quality gaming monitors use TN panels since their performance simply cannot be equaled by any other technology now available.

One such display is the Asus MG278Q. With a 144Hz refresh rate, 1ms response time, and a host of other performance-enhancing features that gamers are sure to appreciate, this monitor is a must-have.

In terms of aesthetics, the MG278Q is relatively restrained when compared to other displays of this type. It has a plain matte black appearance that isn’t particularly eye-catching. Sharp angles are seen on closer scrutiny, however most of the features are concentrated on the stand.

There is a red accent and angular shape, as well as other elements that give the stand a bit of a gaming flair. When it comes to this particular VESA stand, we’re talking about a wide range of adjustments for the display. Considering how solid and flexible it is, it’s unlikely that you’ll have any complaints. When it comes time to replace it, any 100×100 VESA stand or mount will suffice.

DisplayPort, HDMI, and DVI connectors can all be found on the MG278Q’s rear panel beneath a normal plethora of ports. There is a headphone jack, a line-in connector, and two USB 3.0 connections that facilitate fast charging for peripherals.

The ports on the monitor aren’t very visible, but there’s a little graphic next to each one that tells you which one is the input. I’d want to see this feature on more monitors because it’s a great way to connect an HDMI cable without straining your neck.

One of the greatest user interfaces I’ve encountered on a gaming monitor, the MG278Q has five physical buttons and a right-edge navigation nub. GamePlus features including the ability to switch display modes as well as inputs and power are all controlled by specific buttons (more on those later). Using the mini-stick, I was able to easily access the main menu by clicking the nub.

For Batman: Arkham Knight, Asus’ monitor did an exceptional job of displaying the game’s impressive visuals, from the authentic facial creases of Batman and Commissioner Gordon to the realistic raindrops dripping down Batman’s reflective cloak. Even at 90 frames per second on maximum settings, the game’s balletic combat appeared extra-smooth on the MG278Q.

In Star Wars: The Old Republic, the MG278Q proved to be just as capable as its predecessors. It was easy to see opponents and structures in the distance in the planet’s vast forests, which were brightly colored and lushly landscapes.

The high-speed Fighting games and shooters, two genres that demand extreme precision, have Asus on their side. Regardless of the game I was playing (Ultra Street Fighter 4 or BioShock Infinite), I never had any issues with the monitor’s responsiveness.

In addition, the MG278Q is the most responsive display we’ve tested so far, with a lag time of just 9.9 milliseconds. In comparison, the average response time of comparable monitors is about 11 milliseconds. The MG278Q is compatible with AMD FreeSync, a special technology that provides smoother gameplay on AMD-powered computers. FreeSync monitors, like Nvidia GeForce G-Sync computers, allow the display to sync directly with your GPU for minimal screen tearing and motion blur.

FreeSync made a perceptible impact, albeit it was a little one. When using this function in a particularly fast-paced shootout sequence of BioShock Infinite, I felt that things moved a little more smoothly. It hit 72 frames per second with FreeSync disabled, but it climbed as high as 90 fps per second with it enabled at 2560 x 1440.

Because Batman: Arkham Knight operated at 60 fps with no obvious screen tearing regardless of whether I had FreeSync on or off, it was difficult to detect the difference.

With a white luminescence rating of 328 nits, the Asus MG278Q is brighter than our category average of 215 nits, making it our brightest monitor to date.

Asus’ display has a remarkable color representation, producing 105.2 percent of the Rec. 709 color range and exceeding our 101.3 percent average color gamut coverage. We found that the Delta-E rating of 6 (closer to zero is better) is slightly higher than the average Delta-E rating of 5.3.

Scenery, Racing, Cinematic, RTS/RPG, FPS and sRGB are only six of the six display modes available to gamers. In most games, Scenery mode’s vivid colors and pleasant contrast made it my favorite. The RTS and FPS modes make things even more vibrant and brilliant, but I thought that they created a blue hue that was a little too distracting. Racing mode has a lower brightness level than the rest of the game, which could be handy if you’re attempting to stay as focused as possible on the road.

Additionally, the MG278Q’s GamePlus capabilities provide additional visual signals to assist you in gaming. Assist your aim in first-person shooters with one of numerous cross hairs displayed on the monitor, or use a timer for real-time strategy games. Now you can monitor your game’s frame rate with an FPS counter.

When playing shooters like Borderlands 2 and BioShock Infinite, I especially appreciated the cross hairs available with GamePlus. You can only utilize one feature at a time, so don’t expect to simultaneously use the timer and crosshairs. Fraps’ real-time frame rate counter matched the FPS counter in certain circumstances, while in other cases, it merely displayed a static 144Hz on the screen.

Though the two-watt speakers included into the MG278Q won’t fill your gaming den with thunderous sound, they are surprisingly powerful and clear. While playing Borderlands 2 or Batman: Arkham Knight, I was able to clearly hear all of the virtual violence taking place around me.

Although TN panels are known for their poor color fidelity and narrow viewing angles, these are not the only drawbacks. A $150 monitor may be fine, but when you’re looking at a $500-plus monitor, such flaws aren’t going to sit well with your wallet.

The MG278Q does a good job with colors (75 percent NTSC/99 percent sRGB), and the colors don’t look as drab as they generally do with lesser TN panels. The colors aren’t nearly as vibrant as IPS or VA panels, but if you’re just using your PC for gaming, they’ll definitely enough. It’s also good for TN panels, but the viewing angles aren’t quite up to IPS standards.

Otherwise, the display is quite bright and can easily exceed the 350 nits brightness level. Backlight bleed is absent, and the panel does an excellent job with contrast. If you’re looking for an affordable, high-quality display, look elsewhere.

The Asus MG278Q has Nvidia’s G-Sync adaptive sync, much like any other high-refresh rate monitor. Like FreeSync, G-Sync has its own set of advantages and disadvantages.

Nvidia’s intimate engagement in the manufacturing process, which is both a good and a bad thing, is the most crucial factor. Having to pay license fees and buy scaler modules directly from Nvidia means G-Sync monitor costs go up, on the one hand, but on the other, it ensures a higher quality standard.

There is no need to worry about G-Sync not working properly on your monitors because of the high standards for quality control in the manufacturing process. FreeSync, on the other hand, is typically limited in its ability to work in a wide range of FPS, making this a better option for gamers.

The stereo speakers on the MG278Q have an RMS power of 2 watts, which is standard for monitors in this price range. Despite the fact that this isn’t anything special, the speakers are there as a convenience.

It’s hard to install huge drivers into a modern monitor’s small body, and better dedicated speakers are available for about $50.. When it comes to watching YouTube videos, the built-in speakers might be useful, but they’re abysmal for anything else.

An excellent 1440p/144Hz TN gaming monitor with 1ms reaction time and Nvidia G-Sync compatibility, the ASUS MG278Q is one of the best TN gaming monitors available today. As a result, it’s a popular choice among gamers who care about graphics performance, however some may choose an IPS or a 240 Hz display instead. 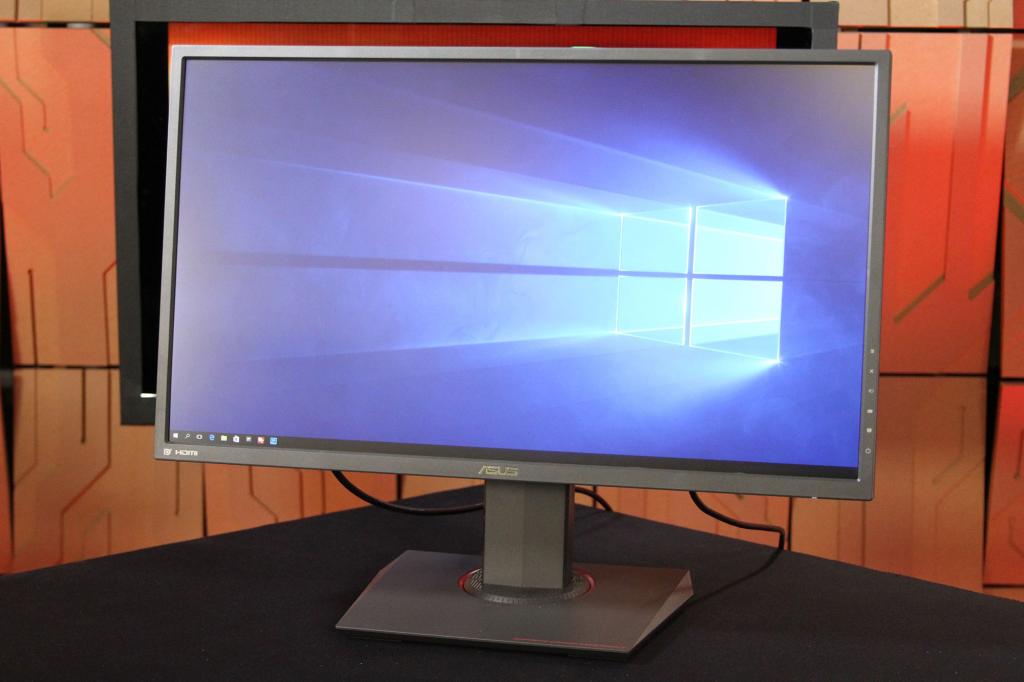 Gamers will like the 27-inch WQHD display with AMD FreeSync adaptive-sync support from Asus, the MG278Q. If you’ve read our review of the Asus MG279Q (HERE), you’ll know that… The MG278Q is an IPS display that supports AMD FreeSync, so you might feel like you’ve seen this before.

Even at this early stage, it’s clear to see who gamers will be most interested in this laptop—those who favor performance yet aren’t afraid of shelling out for high-quality panels to avoid having to cope with mediocre images.

Indeed, in that regard, this monitor strikes all the right notes. It has a fast and responsive 144 Hz/1ms TN panel while still giving 1440p resolution for increased fidelity. It also does an excellent job at handling colors considering it is a TN panel. In addition, G-Sync is included, which is only appropriate given Nvidia’s ubiquity in the upper midrange and higher.

If you can afford it and are searching for a performance monitor, your only other options are to save up more money and purchase a 144 Hz QHD IPS display, which will provide you both superior performance and superior visuals in a single package, or to upgrade to a 240 Hz panel for maximum performance.