Overwatch’s Junkrat is one of the game’s more adaptable characters, able to do massive damage while also controlling large areas with traps and concussion mines of his own making.

Our Junkrat guide for Overwatch will detail the greatest tips, methods, and strategies for the chaos-loving demolitionist.

Junkrat, a DPS hero, is tasked with putting pressure on the other team and racking up as many kills as possible.

However, he can easily accomplish this by utilizing his powers and firing as many grenades as possible, but placement is also crucial. 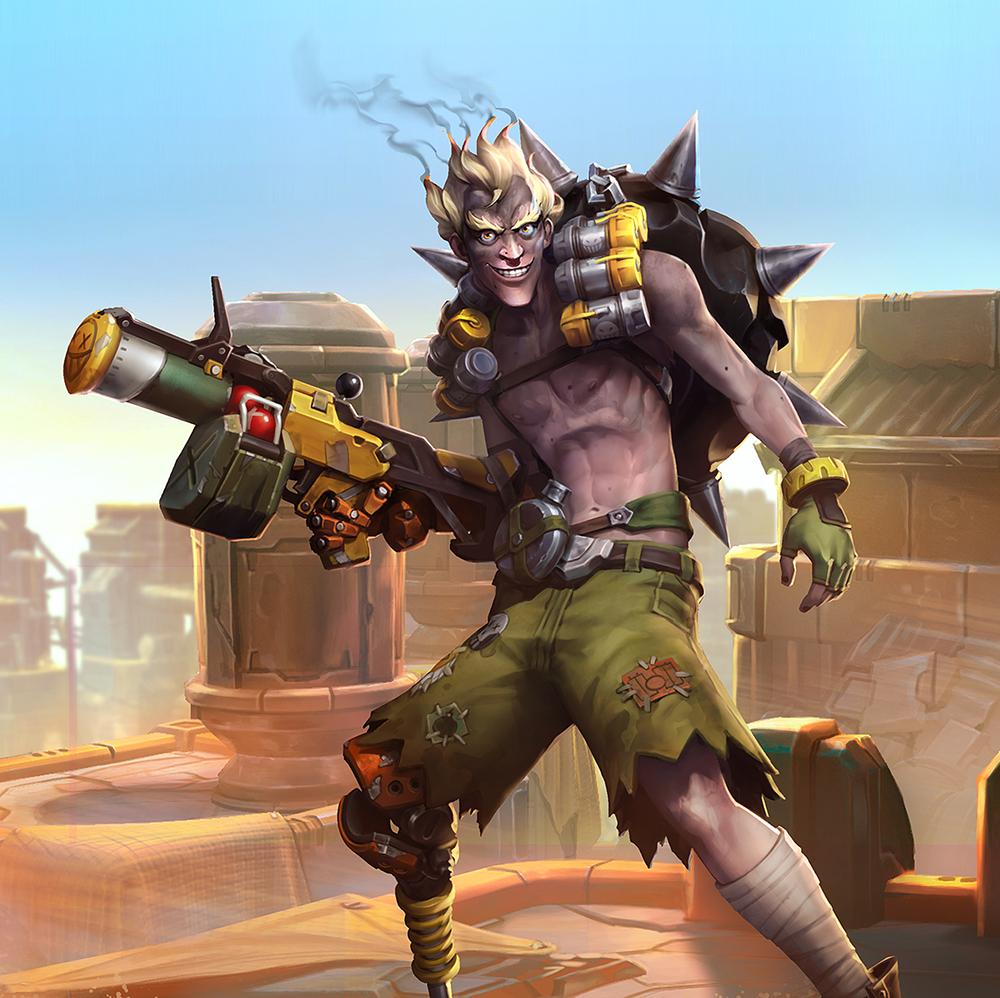 Junkrat’s talents, like those of many superheroes, can be put to imaginative use long after the opponent has killed you!

Here, we’ll go over each one in further detail and give you some tips on how to use it to its maximum capacity.

How To Use Frag Launcher

It is Junkrat’s Frag Launcher that is his primary attack, dealing 120 damage on direct strikes and 10-80 splash damage depending on the target’s range.

His projectiles may bounce off walls and ceilings, making it possible for Junkrat to go around shielded enemies and strike from different angles.

The most effective way to use Junkrat is to constantly lob grenades at areas you believe the enemy is occupied or that they will move too soon from under your control.

You can ricochet grenades off walls and modify your position to deal with foes who are shielded (such as Reinhardt, D.Va, and Orisa).

How To Use Concussion Mine

Concussion Mines, Junkrat’s next ability, cling to any surface and may be remotely detonated.

As long as neither is on cooldown, Junkrat can carry as much as two mines, each of which deals 30-120 damage to its target.

Detonating a mine causes Junkrat and all around foes to be thrown 45 degrees into the air, dealing additional damage.

With Junk’s Steel Trap or as a secondary means of damage during active combat, these are the most effective weapons.

How To Use Steel Trap

It’s simple to dismiss Junk’s Steel Trap because it may be destroyed by other players and, if placed in an unfavorable location, loses all of its value quickly.

One second of disorientation followed by three seconds of immobility is all it takes for an enemy to set off the trap and be taken out by Junkrat and his gang.

When it comes to protecting Junkrat against flankers like Genji and Tracer, they’re a fantastic preventive measure.

When placed near the payload or in places where the enemy team is clustered up, trapping an enemy player is far more likely.

How To Use Total Mayhem

Junkrat’s passive ability, Total Mayhem, allows him to get the final word in the case he dies.

Six live grenades that do 50 damage each are dropped in the area where Junkrat was destroyed.

Even while most other players are aware and will attempt to flee, this provides the apparent advantage of killing an enemy who was close to death before they killed you.

It’s possible to go on top of the opposing team and spam damage until you’re the only one left, which can be followed by live grenades that take out enemies with low health.

How To Use Rip-Tire (Ultimate)

When Junkrat uses his Ultimate, he fires a motorized tire bomb towards the adversary, dealing 50-600 damage, depending on how close they are when it goes off.

Junkrat is left paralyzed and can be easily killed at this time, although the tire continues to function.

When using Junk’s Rip-Tire, don’t be too greedy and aim for large 4-5 stack kills, because you have a greater chance of consistently obtaining 1-2 picks.

It’s difficult for other heroes to keep up with Junkrat’s unpredictable playstyle and high burst damage.

Because his Concussion Mines may be employed as both a weapon and an escape method, he is able to get right in the face of the adversary and survive.

Even though Junkrat should be able to fit into most team compositions, there are some heroes who work better with Junkrat than others.

Which Heroes Combo Best With Junkrat?

Even while Junkrat can do a lot, there are a few obvious flaws in his design that can be exploited by skilled players.

Due to his inability to do long-range damage and his inability to deal with snipers like Hanzo and Widowmaker, he is vulnerable to foes who spend much time in the air and to sniper teams like the Nightstalker (i.e., Pharah and Echo). 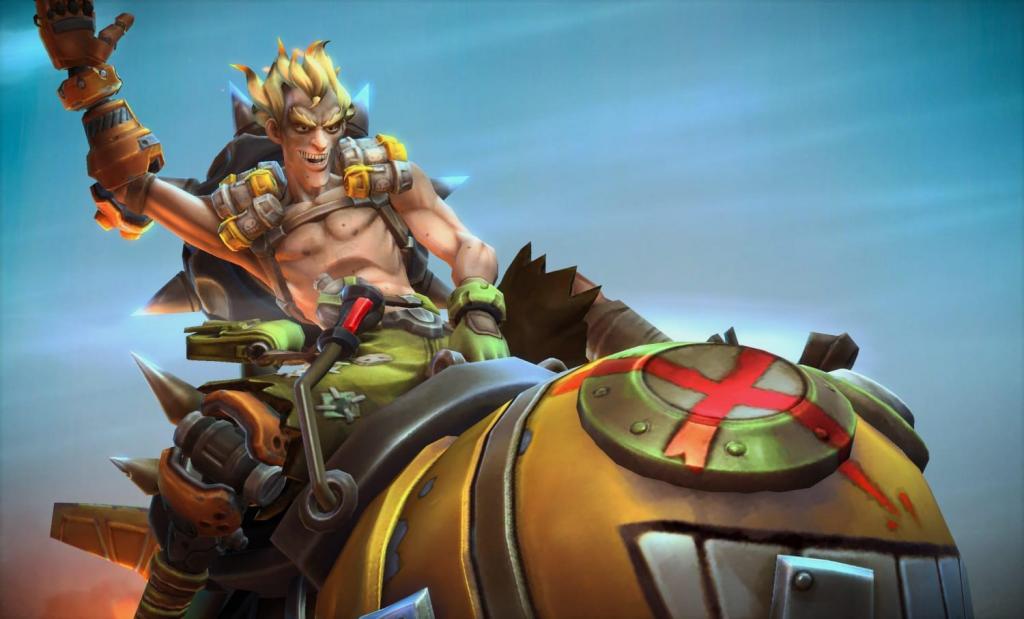 Consider switching off as Junkrat if you find yourself being killed by any of the following heroes. This is a good thing to keep in mind.

Which Heroes Does Junkrat Struggle Against?

It’s our hope that you leave this guide with a better understanding of Junkrat and how to best utilize him.

As a hero, Junkrat relies on a group of allies to keep the enemy at bay and prevent them from gaining the upper hand.

Here are a few additional basic suggestions to keep in mind when playing Junkrat, whether it’s for fun or in a competitive setting.

Junkrat is a character of the Defense class, and his job is to eliminate everyone who enters his realm.

He usually uses explosions, but he also has access to a trap that prevents adversaries from moving for a short period of time.

Frag grenades are the only ammo that may be used with his weapon. It is possible for these grenades to bounce off the walls and the floor and explode when they hit an enemy or after a predetermined amount of time.

To reiterate what I said earlier, Junkrat’s primary function in Overwatch is to saturate the enemy with explosives and destroy anything in his path. As an offensive character, his mine and trap abilities make him a formidable foe.

Each Overwatch character has a set of skills that are equally powerful and distinctive to him or her. Explosives are a big part of Junkrat’s arsenal.

It’s easy to see why the frag launcher is Junkrat’s go-to weapon of choice. The weapon fires an arc of grenades, each of which takes a few seconds to detonate. The weapon’s greatest flaw is the ease with which each shot can be predicted.

Because of the sluggish velocity and high arc of each round, your opponent has a good chance of avoiding a direct assault. The frag launcher, on the other hand, enables you to instantly disperse these explosives in a specific region. It is recommended to employ Junkrat’s frag launcher to target specific foes or to pressure them into retreating from a specific area.

Using Junkrat’s concussion mine is an excellent way to increase his movement and agility. You have complete control over when and how you detonate a mine you’ve thrown. You can just use this mine to scare away intruders. However, it also has a clever trick under its sleeve.

Junkrat is unaffected by the explosive, therefore he can stroll upon the mine and detonate it. You’ll also be lifted into the air at some point. You can utilize this strategy as a way to shower down on your adversaries with frag grenades. The approach can also be utilized to quickly remove Junkrat from the fight.

The steel trap is a fairly simple device to operate. An enemy ensnared in a trap laid down by Junkrat will be rooted to the ground. You’ll be notified if someone steps into one of your traps in the game, making this a very effective strategy.

Place a concussive mine near your steel trap to detonate it. ‘ Detonate the mine as soon as you learn that someone has triggered your trap. The two weapons working together should deal a lot of punishment.

Junkrat’s ultimate weapon is RIP-Tire. Once the player’s hero has gained enough ultimate power, ultimates can only be deployed. To earn ultimate power, you must complete certain activities within the game. 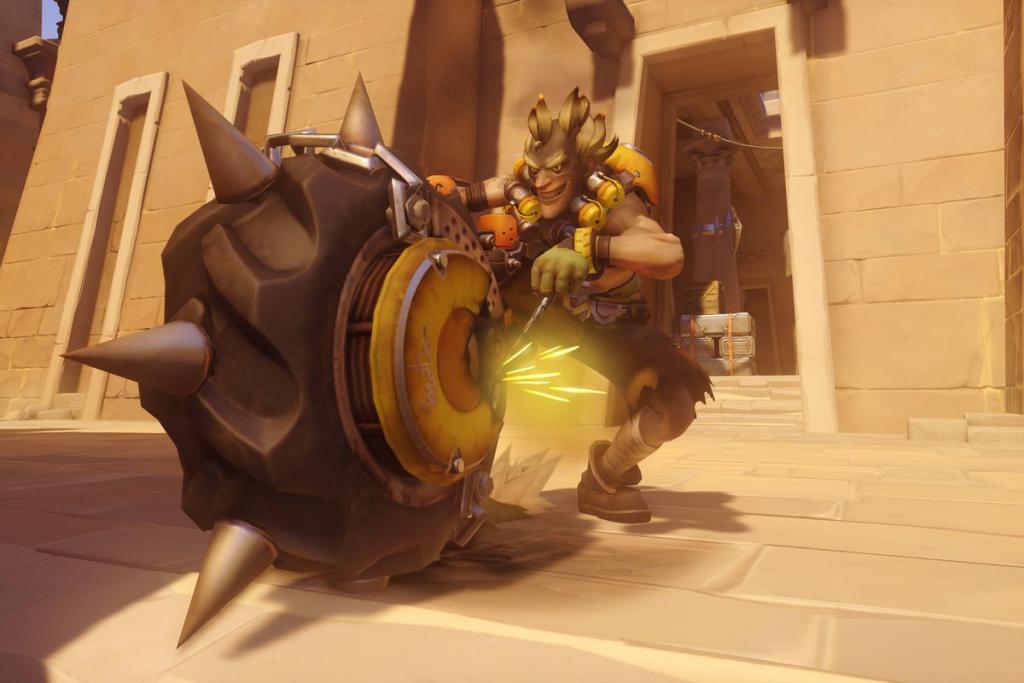 It’s a remote-controlled tire that’s been loaded with a heavy dose of explosives called RIP-Tire. When the ultimate is activated, the player will be able to see via the tire’s eyes and direct the explosive onto any surrounding foes.

To maximize the RIP-devastating Tire’s potential, acquire as many foes into its sphere of influence as possible. The tire does produce a lot of noise, which serves as a signal to any nearby adversaries. In addition, the tire can be shot by adversaries, destroying the ultimate.

To make the most of this big blast, you’ll need to act quickly. Note that Junkrat is still vulnerable while maneuvering the tire, making it more deadly the longer you keep it in your hands.

Junkrat’s inactive ability is Total Mayhem. When the anarchist hero dies, he will detonate every bomb in his possession. An explosive detonation occurs at the location where Junkrat met his death. If you’re nearing the end of your fight, getting as close to your opponents as possible to soak up some last-second damage can be a good idea.

Because Junkrat is so predictable, he’s an easy target for some of the game’s other characters. There is a good chance this anarchist from Australia might inflict serious harm on a number of participants.

You may see all of Junkrat’s counters by looking at the list above.

Junkrat has enough to offer, but there are still a few tricks of the trade that you need to learn. Take a look at these last-minute strategies and methods to improve your Junkrat abilities.

I’ve used this weapon to take out several Junkrats (and have also paid the price for being too close to a recently-dead Junkrat!).

Is Junkrat good in Overwatch?

Because he is Overwatch’s most op and broken hero. From a distance, he can kill a Roadhog without ever noticing him. When he doesn’t know where a hero is, he can easily 2 shot him. Over half of heroes may be insta-killed by trap + mine.

How do I get better at Overwatch Junkrat?

Playing Junkrat with these general guidelines in mind

Accurate grenade placement requires great skill and experience with the Frag Launcher. Junkrat’s greatest skill is his ability to make any area dangerous to travel through, therefore it’s advisable to aim your grenades at an area rather than a specific target.