The Soulcalibur series has had six installments, the most recent of which is Soulcalibur VI. It’s adored by fans around the world because of the care and attention to detail put in by the developers.

There will be fighters on the roster who are better than others. That’s how fighting games work. The characters in Soulcalibur VI are ranked from greatest to worst in this article.

Although there is a significant disparity between the difficulty levels in Soulcalibur VI, it is one of the more evenly distributed games on the market today. If you put in the effort to learn these techniques, you have a good chance of having a long and fruitful career as a fighter.

This list categorizes each character’s specific benefits and breaks them down into levels. Let’s get down to it.

In competitive matches, they are the finest fighters to use. With only a few minor drawbacks, they’re a great foil for the rest of the ensemble.

He is able to adapt to any circumstance because to his large range of adaptable combos. In tournaments and ranking games, Raphael’s greatness is demonstrated. He has no problem taking on any opponent.

Amy’s weakness is most likely her lack of distance on the field. She’s a monster in close quarters, but she lacks Raphael’s complete floor control.

She isn’t particularly powerful in terms of damage, and she has a hard time dealing with opponents who have long-range weapons of their own.

Raphael is a talented fighter with a high ceiling for improvement. As a result, a player’s viability increases exponentially as his skill level improves. A wide variety of flexible combos with varying ranges allow him to adapt in any situation. Raphael’s success in tournaments and rated games proves his supremacy.

One of the scariest sights in Soulcalibur is Amy with a heap of Purple Roses. It takes her a while to get going, but once she does, the opponent is condemned to lose. Raphael’s entire control of the floor is beyond her, but she’s a beast in close quarters.

Ivy is the best in the game when it comes to commanding the fighting arena. With her long-ranged sweeping assaults and long-ranged grab, she can smash opponents who focus on close-quarters combat. In terms of damage, though, she isn’t particularly powerful, and she may struggle against long-range weapons-wielding opponents.

The inconsistency of Yoshimitsu can be traced back to the stage and the player’s skill. When Yoshimitsu’s opponent is proficient, it will be difficult for him to defeat him. When it comes to deceiving his adversaries, he is a master of speed, strength, and brutality. Because his animations are so swift, you can put them to use right away.

In most situations, these fighters are superior to S-tiers; in some cases, they even surpass them. They may not be as “overpowered” as those in S-tier, but they’re still a good deal better than the others.

Siegfried can also take advantage of an opponent’s shaky play style. His methods of approach and commencement are sufficient for this.

She possesses good combinations, rapid movement, and low-risk initiations that require minimal skill to perform. She has a lot of versatility. While her damage output should be better, she more than makes up for it with her other abilities.

Her strongest role is to run down and pin the opponent in the corner, rather than to win the neutral game. The remainder is handled by her extremely rapid and lethal combinations.

He’s a perfect safe fighter who can also dish it up, thanks to his focus on footsies at medium to long range.

His greatest asset is his ability to change the momentum of the fight in his favor. Due to his superior defensive abilities and long range, he is able to exert dominance in tight quarters. Siegfried will be able to take advantage of a hesitant opponent. This can be done using his approach and the techniques he uses in the beginning.

The fact that Sophitia’s moveset is simple while still being effective makes her an appealing option for newcomers. She possesses good combinations, rapid movement, and low-risk initiations that require minimal skill to perform. She has a lot of versatility.

Sopithia and Cassandra have many of the same foundations. Having more attacking tools in close range gives Cassandra the upper hand. Rushdown characters are her greatest mode of play, winning the neutral game first before pinning the opponent in their corner.

Dealing with Zasalamel is a significant undertaking, especially when done online. His maneuvers will most likely catch you off guard even if your latency shifts by a millisecond. It has a decent neutral strategy and some good zoning options. It also has an extremely potent soul charge.

He has a lot of promise, therefore it’s worth the extra effort to work with him. He’s a great safe fighter who can also dole out some serious damage, thanks to his focus on footsies.

Even in ranked games, these fighters have the potential to run down their opponents. Overall, these are some wise decisions.

Mitsurugi is as dangerous as ever, thanks to the inclusion of a second Shura Blade.

His undoing is a result of his sluggishness. Meta at this time relies around utilizing arena space to attack and defend quickly. However, those that thrive on Astaroth’s technical playstyle will be rewarded greatly.

A few years ago, Mitsurugi was considered an average fighter. While his tournament success has highlighted what his ceiling is, he still has a ways to go.

2B’s Aggressive Shift is a game-changer for opponents who aren’t paying attention. Combined with her Analysis Points system, her offensive and defense are a potent combination.

In order for Maxi to reach his potential, he must put in a lot of effort. There are many other positions he can have, each with its own set of requirements. In order to adjust and counter each of your positions, your opponent will have to put in more effort.

With his Life Force, he is the only one capable of inflicting a lot of damage on the enemy’s defenses. His throws can also be used to return to neutral if necessary in most instances. There is a problem with Hwang since understanding his playstyle needs a lot of player adaptation.

Massive damage is dealt by his assaults and command grabs. As a result, Astaroth is a fantastic choice for gamers that need precision. Slowness is his downfall. To take advantage of the arena’s size, current meta depends on rapid attacks and defensive tactics that exploit the region.

Voldo is a clever fighter with a wide range of possibilities for a sleight of hand, giving him a threat to opponents. His damage output is adequate, and his stance shifts give his techniques a new level of depth.

She’s a solid performer, able to wreak havoc with relatively low-risk moves. Despite her lack of burst damage, she makes up for it by doing constant, long-lasting damage throughout the course of a match. 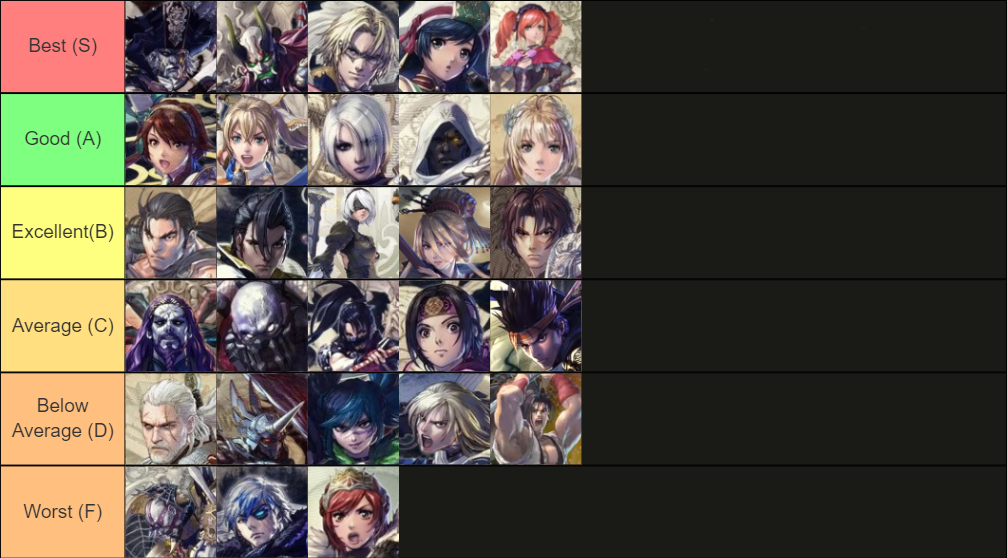 Competitively, these fighters are up there with the “average pool.” Nothing about them stands out, yet there aren’t any obvious problems either.

When it comes to fighting, Talim is more of a “swing and miss” kind of guy. She has deadly combinations, which lend themselves well to an attack-oriented strategy. If an experienced player is able to counter Talim, Talim’s game starts to suffer.

Seong is the undisputed monarch of the ring when it comes to knocking down her opponents. At close range, she is vulnerable to attacks from opponents that are well versed in the art of zoning.

Haohmaru uses a variety of postures to surprise his opponents. Despite his powerful attacks, he is a one-trick pony compared to other fighters. Use his projectiles as a defense against this.

The best approach to play Setsuka is methodically and slowly. She has a vast variety of counterattacks at her disposal. While her soul charge is fantastic, her other techniques can be tough for some, she has a few that are very rewarding for those who master them.

However, Azwel’s damage output is inadequate, and he has an excellent array of talents. His saving grace is the abundance of low-percentage shots he can make to keep pace with the rest of the field.

A few wins in ranked competition might be possible, but the road ahead is a long one. There are better fighters in this list, but their toolbox isn’t as well-optimized.

He also appears to have remained unchanged since the game’s launch. However, he is neither affecting nor moving with the meta. This is a strange decision by the developers, in our opinion.

While Kilik possesses several decent skills across the board, none of them stand out. The result is that people refer to him as a “average” boxer.

As a counter-attacker, Nightmare is most effective. His Revenge Armor makes it easier for him to play this way. It’s hard for him to cope with players who already know the mechanic.

Tira is currently the most underutilized fighter in the game. Due to the fact that she constantly changes her mental state, she has a wide range of abilities. She’s a lot of fun to play if you get the hang of her playstyle.

He’s a tough guy who has a solid base. The difficulty is that he doesn’t have anything that would set him apart as a threat. Although he’s easy to learn for new players, his low skill ceiling makes him less useful in more difficult games.

These are some of the worst fighters in the game when it comes to extremely competitive bouts. They have a worse winning percentage than the rest of the team.

She’s has a wonderful charge button mechanic, but her floor control is a little sluggish. Mid to long-ranged strikes can easily hit her.

It is Groh’s opinion that he is fit to play. The difficulty is that he lacks many powerful assaults to help secure matches in his toolbox.

Hilde, being a relatively newcomer to the game, has a lot to prove before she can join the fray. Her charge button mechanism is amazing, but she has horrible floor control. A medium- to long-range strike would put her at risk.

Defeating Taki requires pinpoint accuracy in movement and attack, as well as stunning your opponent with flashy and extended combos. Taki is the master of both. As a result of the latter, Taki is demoted to the lowest rank possible.

Our Soul Calibur 6 Tier list was as follows. This list might help you narrow down your search for the best characters in the game. Our recommendation is to choose a character that you enjoy playing rather than one focused on stats. 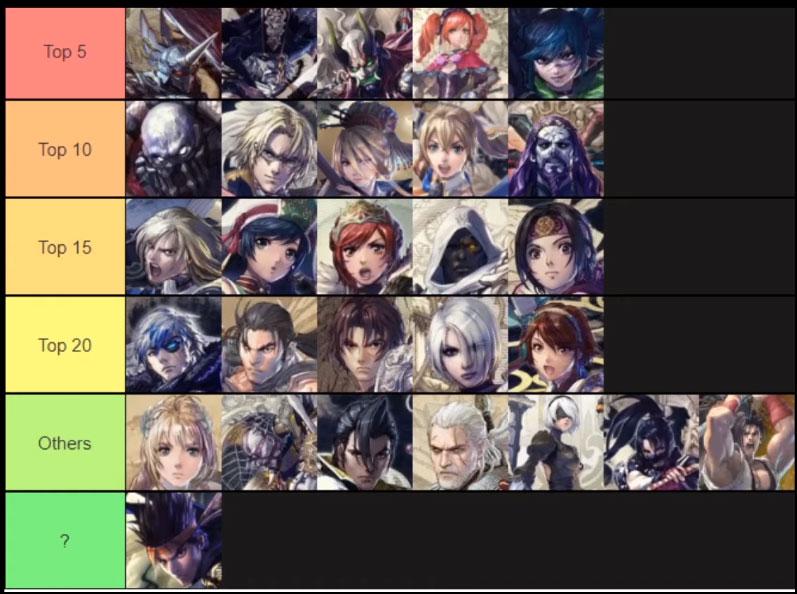 Does soulcalibur 6 have story?

Is Yoda in Soul Calibur 6?

How long is the story mode in Soul Calibur 6?

There are approximately 20-30 minutes spent on each character scene. This indicates that clearing Soul Chronicle will take at least two to three additional hours, for a total of at least four hours.

Our Soul Calibur 6 Character Tier List came to an end with that. S-to-F rankings were used for this Tier List. Characters in Soul Calibur 6’s S-Tier Tier are the strongest and most useful at the highest level of competition, with F-Tier Characters being the least valuable or the weakest. If you’re having trouble deciding on a fighter, our Tier List should be able to help.